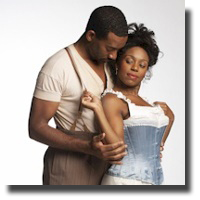 Intimate Apparel is Lynn Nottage’s misleadingly titled drama that centres on a lonely African-American corsetiere and seamstress who harbours some serious self-esteem issues.

Set in Lower Manhattan in 1905, Esther (played by Marci T. House) is lamenting on being another year older, but she is not celebrating her 35th birthday by going to one of Manhattan’s many diners. She’s working late in her room that she rents from Mrs. Dickson (Lesley Ewen) putting the finishing touches to a client’s undergarment.

Esther’s skill with a needle and a sewing machine and knowledge of fabric has afforded her an almost unique independence when compared with other women of her ethnicity and of these times. She has even managed to put some money aside which she has sewn into a patchwork quilt. Still a spinster whose life, as well as opportunities for marriage, seem to be passing her by; Esther yearns for the affection and intimacy that a loyal mate would provide.

Out of desperation, she embarks on a pen friendship with George Armstrong (Daren Herbert), a laborer working on the Panama Canal construction. Unfortunately, Esther can neither read nor write so she must rely on help from her customer Mrs. Van Buren, a bored white socialite. Through his words, George would appear to be decorous and deferential, but will their continued association bring her happiness or even deeper loneliness?

While there much that will appeal to discerning audiences in this production, the plodding pace of the first act isn’t likely to be included. By the intermission, I had started asking myself “Where is this play going and why am I here watching it?” Happily, the tension rises significantly in the second act and interactions between supporting characters become more complex, although, the plot twists remain predictable.

This is Esther’s story and Marci T. House turns in a sublimely nuanced performance in the role of the play’s principal character. I personally found myself drawn the character of Marks the Kindly Jewish textile merchant delightfully underplayed by Jonathon Young. Bermudan native Daren Herbert, the show’s other male actor unapologetically supplies the only real conflict the play offers up. Lesley Ewen’s huge talent is markedly underused as Esther’s intrusive landlady. The vivacious Marsha Regis does her best as Esther’s erstwhile friend, but seems decidedly miscast as a demurring strumpet.

Pam Johnson’s beautifully constructed staging is certainly worthy of praise. It takes up every bit of the stage’s available ‘real estate’ and has to work for: Esther’s quarters, Mayme’s bedroom, Mrs. Van Buren’s boudoir, George’s camp in Panama and Mr. Mark’s shop – in other words – Esther’s entire world. Lovers of jazz music may find bonus enjoyment with sound designer Doug Balfour’s syncopated ragtime. The music is recorded, but is nonetheless artfully integrated into the story through Mayme’s piano playing.