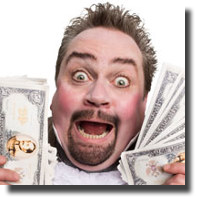 Making fun of the powers on high has been the theme of comic writers since Aristophanes created Frogs. Gogol's classic theme of how scammers can go to the extent of ripping off an entire town from Mayor all the way down to the "faceless masses" is another classic topic which will live on forever.

And this what happens when a provincial village town is thrown into a world of panic, greed and silliness when its elected officials learn that a government inspector is paying a visit. Who would have thought that Studio 58 students could convert a 19th century play into a wildly witty, smart and satirical production? But they did,and that's why Studio 58 is internationally known as one of the best training grounds for professional actors.

Led by professional actor Joel Wirkkunen (Mayor Anton Antonovich), who started off on a high note and maintaining it till the end, the play drew laughs from start to finish. Adapted by Jeffrey Hatcher, the cartoonlike characters were put onstage as though you were watching a live Disney show, with actors interacting with the audience, even begging for money.

Kudos also to the production staff, particularly to Mara Gottler whose period costume designs have always hit the mark, remembering the the Bard on the Beach shows I've reviewed in the past. Set designer Pam Johnson did an excellent job with the sets and props. There was a funny incident when a red curtain got stuck and when it was yanked out, a part of the set broke. Lighting designer Adrian Muir likewise did a fantastic job.

It's been quite a while since I've reviewed a Studio 58 show and I'm happy to see how invigorating it's getting, and how good this is for the Vancouver scene which is getting to be one of the world's meccas in the theatre arts.