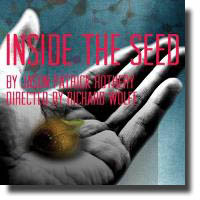 The Cultch & Upintheair Theatre
Inside the Seed by Jason Rothery

Jason Patrick Rothery’s new morality play is (very) roughly based on Sophocles's tragedy Oedipus Rex. Protagonist Dr. Foster Bryant (Patrick Sabongui) is every bit the tragic hero whose downfall is destined from birth. Bryant is a senior executive at a fictitious agricultural biotechnology corporation not unlike the contentious Monsanto Company. He also has a social conscience, or seems to have.

Bryant wants to send up to 100,000 tons of grain to Africa to ease the present famine and divert a future catastrophe. Meanwhile, he has to deal with criticisms of GM foods, including risks to both human health and the environment. On top of negative opinions and pending law suits. Bryant has to deal with his company being dragged into honouring a military contract initiated by a subsidiary company prior to a take-over.

Inside the Seed gives audiences a lot to think about and although complex, the narrative is delivered in bite-size pieces through meticulously constructed dialogue, in turn by the entire well-dressed cast.

Rothery’s play doesn’t offer much humour, so it comes with some relief when Tetsuro Shigematsu takes a turn onstage as maverick scientist Sampson Pai who recognises an early problem with the genetically modified grain. The role almost looks like it may have been written for the London, England born Japanese-Canadian.

Patrick Sabongui certainly has the most to do in the role of the zealous scientist who is making decisions of international importance while his personal life is crumbling. Mia K. Ingimundson brings a healthy dose of character to the role of Mrs. (Isobel) Bryant who goes from comic to tragic in a single scene. She also gets to come across with whimsical quips like “I’m East-European; I don’t have a sense of humour.”

Jergus Oprsal’s unconventional stage set-up divides the seating area equally. There are actually two “mini” sets: one consisting of a toni office in a typical corporate ‘ivory tower’ that might be anywhere in North America, the other is a seating area where actors not directly involved in the immediate action remain on stage to witness the goings-on.

Either by accident or by design, Rothery’s play hits a nerve in a current climate of suspicion towards biotech foods. For that reason this might be an ideal vehicle to pique your interest further.