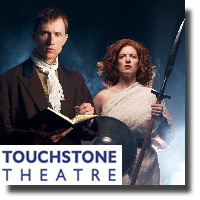 Munsil's play reminds me of Rizal's Consejo de los dioses, a one-act play written around the end of the 19th century whereby the gods of Olympus hold a contest on who is the greatest writer in the mortal world. Naturally, since the play was intended for a Spanish audience, Cervantes comes out triumphant. In the same way, Munsil comes up with a play where a British poet is selected by the gods to become one of the most famous English poets.

In this play, John Keats (Daniel Arnold) abandons his medical career to become a poet. He looks for inspiration in The Elgin Marbles: the fragments of the Parthenon taken from Greece by England’s Lord Elgin. In a somewhat deus ex machina fashion, Athena (Colleen Wheeler) together with Apollo (Frank Zotter) and Hephaestus (Donald Adams) make their appearance in the British Museum and argue with each other about reclaiming the statues and seeking revenge for the desecration of the Parthenon.

Keats who happens to be in the museum with his mentor, Benjamin Robert Haydon (Mike Stack), a not-too-famous religious painter and a diarist, is caught up in this debate. Arnold as Keats who has just published his first book, plays the part of a bungling poet, unsure of his fate. But then, through the magic of his patron, Apollo, god of poetry and medicine, he is transformed into a visionary and sees the light. Arnold projected his role as Keats quite well, playing the part of a young man still unsure of his calling, but then we see a metamorphosis at the end of the play.

Wheeler as Athena was powerful in the delivery of her lines. She is angry about the desecration of the Parthenon and wants the statues returned to Athens. For more than 200 years, the Parthenon Sculptures a.k.a. The Elgin Marbles have been at the centre of an international debate. Greece wants them returned but the British Museum maintains that they were obtained legally.

Zotter as Apollo was funny. I'm not sure whether he was trying to play a gay Apollo. I guess there were gays too among the mythical gods of Greece. But I found his performance quite amusing. Adams as Hephaestus, the god of blacksmiths and technology, disguised appropriately as "Mr. Smith" when asked who he was, acted as the humble god, servant to the other gods, in the beginning, but then, takes his revenge and comes out strong in the end as he now takes his place as the leader of the gods since the mortal world has now evolved into "high tech" mode, so to speak.

Although there are many sub-themes in this play, which could have been trimmed down to focus more on Keats, it was nevertheless well-directed and well-acted. The mise-en-scene was innovative, with the audience on both sides of the stage. The costumes looked authentic as did the set design.

I commend Touchstone for its vision of bringing Canadian theatre to the helm, particularly producing shows by female playwrights, and I look forward to seeing more of this creative and innovative "touch" of Touchstone.