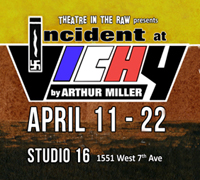 Theatre in the Raw Presents
Incident at Vichy by Arthur Miller

Jay Hamburger founded “Theatre in the Raw” out of a Commercial Drive café in 1994, and the theatre company is aptly named for their risk-taking and grass roots approach to theatre. Hamburger, who is the Director of this production of Arthur Miller’s famed play Incident At Vichy, introduced the play with the Martin Niemöller poem, “First they came…” This poem perfectly set the stage for the ensuing performance, as it highlights themes of guilt, persecution, and complicity that are significant in Incident at Vichy.

The stage set-up is a dingy police station waiting room in unoccupied Vichy, where several characters of varying levels of anxiety are sitting around waiting to be called upon by German officials. It is a diverse group – a socialist electrician, an Austrian nobleman, a businessman, a young painter, a waiter, a gypsy, an actor, a psycho analyst, and a young boy. All have been brought in under unclear circumstances, presumably to have their papers checked, but the air of danger and worry is tangible.

Soon, they are trading stories of fear and persecution. A clearly emotionally distraught and anxious young painter, played by Michael Kruse-Dahl, speaks of having his nose measured and is the only one to speak aloud what no-one else wants to  that the common link between almost all of them is that they are all part of the tribe. The electrician (played by Roger Howie) speaks with jovial hope that socialism will save them all, in spite of having heard of stories of trains full of people being carried to forced work camps. Leduc, the psycho analyst (played by Jacques Lalonde), has a different perspective. He fears the worst and urges us to recognize our own complicity in standing around and letting it happen, stating that we are doomed to repeat such atrocities because no-one is willing to stand up and fight.

Thinking about this play, I could not help but be reminded of the old fable about the boiling frog. The premise of the fable is that if a frog is suddenly put in boiling water, it will jump out, but if it is put in lukewarm water that is heated slowly, it will not perceive the danger and will be cooked to death. Essentially, the characters in the waiting room are all frogs, being slowly heated. All of Europe leading up to WWII had been slowly heated for that matter. It is a blatant metaphor for our own inaction in the face of ‘only slightly worsening’ social ills. In fact, you might say this play is more relevant than ever, as we enter an era of “fake news” and morally questionable state representatives, responsible for stoking racial conflict and terribly divisive politics, and where we must examine our own complicity in the persecution of others when we stand by and make excuses while allowing our freedom and the freedom of others to be taken away slowly.

The Major, judiciously played by Rob Monk, is a disabled veteran of the German army and has been tasked with detaining the men, though he clearly despises the assignment. Monk’s German accent and hobbling on stage along with his ensuing intoxication later on brings sharp complexity to this character, who may be one of the most sympathetic in the play. He is the perfect example of the complicity that Leduc has referred to, in that he follows the orders of his chain of command in order to protect his own job and personal security. What makes the Major such an interesting character is that his motivations are unnervingly reminiscent of those who have voted for political representation in the expectation that it will save their jobs and freedoms, even at the expense of the safety and security of others. The Major has us questioning our own motivations more than any other character… What would I do in his situation?

Before long, café owner Ferrand arrives to whisper anxiously to the waiter (played by Julie Merrick) to warn that he has overheard the detectives talking about burning Jews in furnaces. Ferrand (played by Giuseppe Bevilacqua) only has a few lines in the play, but Bevilacqua proves that there are no small parts in theatre. Ferrand’s new information sends fresh panic to the room. Prior to this pivotal moment, the characters’ fears were merely speculation, whereas now there is a palpable sense of danger. Now, the gregarious laughing heard back stage brings even more tension and evil implications.

All players in this ensemble have delivered an incredibly thoughtful examination of how the Nazis were able to perpetrate the Holocaust with so little resistance. The subtle nuances of Miller’s play are well executed by this emotionally invested cast, and the performance left men with much to consider. I also happened to catch this performance on Thursday April 12th, the day of Yom HaShoah. For those of you who do not already know and have not already googled it, Yom HaShoah is an observed day of remembrance to commemorate the approximately six million Jews who perished in the Holocaust, and for the Jewish resistance in that period.

Do not miss this production of Miller’s Incident at Vichy, if not for the important reminder that we must be vigilant and watch for the slowly rising water temperatures of our current political climate, then go to support this inspiring little theatre company that aims to give exposure to “voices seldom heard” – from the struggling and underemployed actors to both tried and untried playwrights.