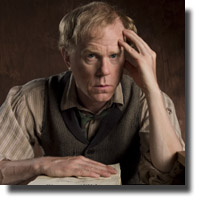 What great and dynamic actors (John Murphy, Cherissa Richards, Laara Sadiq and Andrew Wheeler)! And such a magnificent mise-en-scene: direction (Katrina Dunn), stage design (David Roberts), lighting design (Adrian Muir), sound design (Owen Belton) and costumes (Farnaz Khaki-Sadigh)! A complex play but because of the direction and acting, it came through flawlessly and the pacing was perfect. The audience was enthralled especially with the long schizophrenic monologue, the drunken scene of John Murphy (Gordias Carbuncle). Incredible method acting that would have thrilled Stanislavsky and the Actors Studio.

Piatigorsky mixes all kinds of themes in this play as it relates to the Hydra myth, the many heads of the reptile in constant struggle with Heracles who, despite cutting the serpent's heads, more heads grow back. Here, the anti-hero creates 100 heads, 100 chapters in his novel, Eternal Hydra, and each head represents a person's life and vision of humanity.

The play takes us to different eras: present-day New York, 1930s Paris, and the Civil War era New Orleans. The actors play different roles, and the playwright uses the Elizabethan "aside" technique, as the actors comment about the other actors. Imagination and fantasy is also part of this complexity, as Sadiq playing Vivian Ezra in present-day New York, talks to the spirit of Carbuncle who, in turn, is seen only by Ezra as he prompts her to have his novel published.

The playwright tackles different themes such as the Negro and Jewish questions. His play also reflects the struggles of writers who are caught in today's publishing world. The dialogue in Act II between Wellington (Andrew Wheeler) and Carbuncle reflects the attitude of publishers--they're there for the money irregardless of the talent and vision of writers. That argumentative interchange between Wheeler and Murphy was powerful.

Piatigorsky lives in Toronto but carries both Canadian and American citizenships.. He has garnered several awards for his plays: two Dora Mavor Moore awards, and the 2005 Elinore and Lou Siminovitch Protege Award for Playwriting.