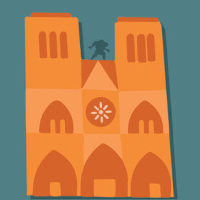 It was another enjoyable two and a half hours of dancing, singing and joking around at last Sunday's (December 10) full house matinee performance. It's this time of the year for pantos all over the lower mainland, and this time, the White Rock Players’ Club presents the Victor Hugo masterwork ~ The Hunchback of Notre-Dame, based on the script by Panto master, Dave Baron.

Under the direction of Alex Lowe and Ann-Marie Zak, with Music Director Marquis Byrd, and Choreographer Rachael Carlson, the Hunchback and the realm of pantomime collide in a glorious explosion of music and magic. This show is shaped with elements that will be very familiar to long-time White Rock Panto-goers, with Shananigans and the theme song, "The Year I Fell in Love."

There was a lot of audience participation, especially the young kids who came up onstage to sing "Frere Jacques. The song and dance routines were delightful. However, the actors should work more on voice projection (with the exception of veteran panto actor Bryce Mills who has played Dame all these years).

The main characters, the evil Cardinal Frollo, portrayed by Kelly Thompson, Ben Pilger as Quasimodo, Samantha Silver as the young poet Pierre Bonhomme. and Esmeralda, played by Juliana Peralta did a good job portraying their roles.

Set in Paris in the roaring twenties; the show follows a cast of characters struggling to make a life in one of the most important courtyards in the city - La Cathedral de Notre Dame. Beggars, aristocrats, and poets all live under the watchful eyes of Cardinal Frollo, and all the while keeping a watchful eye on the shy misguided bell ringer.Quasimodo.

Patterned after the stock characters and plot of the traditional commedia dell'arte,the ending is delightful, as there are secrets uncovered, and everyone is reuntited as everyone sings "We wish you a Merry Christmas!" .