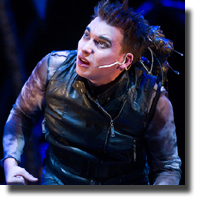 In New York, musicals are classfied as Broadway and Off-Broadway. The Broadway ones are commercial in nature while the off ones are experimental and most of the time, go against the norms of the standard Broadway hits. Hunchback is a darkly romantic musical, and once you put in that tragic tone to a musical, then it goes off the grid, as it were.

Although sometimes, these off-experiments get to Broadway, just like Sondheim's musicals which started off away from the norm of "you make me feel good" musicals. This seems to be the norm now in the 21st century. Gone are the syrupy melodrama musicals. Musicals now deal with social problems, such as Rent which deals with problems between tenants and landlords.

In the case of Catalyst Theatre, they've done something different. They've picked up and adapted the classics, such as Nevermore, based on Edgar Allan Poe's life, which we reviewed in 2010 at the Push Festival here. Now, they've come up with Hugo's classic, Notre-Dame de Paris , which was put into several versions in film and TV, including the Disney animation.

Edmonton's Catalyst Theatre has toured the world with its creations. Under the leadership of Artistic Director Jonathan Christenson and Resident Designer Bretta Gerecke, they've come up with this hit musical which, in my personal opinion, I didn't quite enjoy, as I'm more prone to the ol' fashioned musicals.

But it's the 21st century, and this is the century of being different, being new, recreating in your own fashion the old classics. The Canadian media expert Marshal MacLuhan once said that the media is the message. In other words, it's no longer the moral or the leit motif of a story that matters--it's the way it's presented.

Presentationwise, this company which reminds me of Cirque de Soleil with their style of costuming, choreography and performance, has delivered, and I noticed the awe and silence of the audience on opening night as the performers sang and danced in their unique and grotesque manner. It is a grotesque musical as it reflects the deformity of Quasimodo, and the sombre lighting effects reminded me of Das Cabinet des Dr. Caligari, a 1920 silent horror film directed by Robert Wiene.

Before the performance, Playhouse Artistic Director Max Reimer and Playhouse Chair Jeff Schulz welcomed the company. Cultch's Executive Director Heather Redfern was practically overexcited to form part of the welcoming group saying how proud she was of this Canadian company that's toured the world and getting accolades.