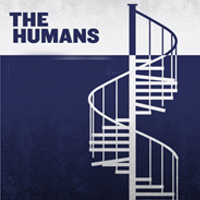 The tagline for Stephen Karam’s 2015 Tony award-winning play The Humans is “Family drama, on more than one level.” That’s because the set design features a modest cross section of a two-level apartment in Manhattan.

The premise is Thanksgiving dinner, and Brigid and her live-in boyfriend Rich have invited Brigid’s parents, sister, and grandmother over for dinner. As the family members arrive, we see that Brigid’s sister Aimee is getting over a painful break-up along with problems at work, and to top it off, gastro-intestinal issues. Mom Deirdre (played by Nicola Lipman) and Dad Erik (Kevin McNulty) appear to be drinking some problems away throughout the play, problems that turn out to be marital and financial (this is revealed closer to the end of the play). And grandmother “Momo” (a difficult role, played by Gina Stockdale) is in a wheelchair, suffering from late stage dementia.

Briana Buckmaster as Aimee stole the show for me with her sharp wit and sympathetic demeanour. And Brigid played by Samantha Rose Richard held her own in the role of the sister who is trying to be supportive in the face of her own misgivings. In spite of these obvious interpersonal and individual crises, this is a tight-knit family that is generally very loving and respectful. We can all relate to having a family on the spectrum between “slightly dysfunctional” and “full blown dysfunctional”; I would never trust anyone who told me their family isn’t. I think I expected and wanted The Humans to be more controversial, more political, more… angry?

Written and performed a year before Donald Trump became the US President, this play is the perfect model to illustrate the financial and health issues plaguing American families. Yet nothing about this play is political. In fact, I felt angrier and more indignant about what these characters were facing than even they seemed to be. For this reason, they did not seem relatable or even really that likeable.

Brigid’s boyfriend Rich (played amicably by Richard Saad) served little purpose, seeming only to have the function of drink-pourer and general outlier, especially since he did not seem to be affected with any of the types of problems that the rest of the Blake family were dealing with, other than alluding to a previous bout of depression to which Brigid’s mother remarked, “In our family we don’t have that kind of depression,” to which Aimee then responded sarcastically - “Just a kind of stoic sadness.” Stoic sadness, with a dash of sarcastic humour, really perfectly epitomizes this play.

The most engaging part in the performance was the set itself, a unique two-story stage design that featured modest decor, intermittently faulty lighting, and noisy neighbours. This unassuming and unpretentious space gave this family opportunities to eavesdrop, argue, escape for alone time, and also sit together and be supportive of each other. Its imperfections and noisiness was a good reflection of the family itself, and perfectly suited the drama on stage.

If you are looking for a play to make you feel like you are extremely well-adjusted in comparison, don’t bother with Karam’s The Humans. If you do, you may not cry, and you may not laugh, but you will certainly nod your head appreciatively at many points in this play. Because much of what this family is going through is fairly unremarkable - break-ups, financial problems, illness, and career setbacks - but most unremarkably of all they are navigating their difficulties with kindness, love, affection, and respect of each other’s feelings. I know - strange right?