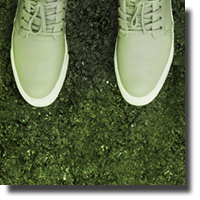 In keeping with Club Push’s less formal, unformatted presentation, Huff started fashionably late with solo performer Cliff Cardinal stepping on the Performance Works with his head inside a transparent plastic secured around his neck with tape. A pretty dramatic stage device, but I wondered just how Cardinal was going to remove the bag while his hands were tied behind his back. It didn’t take long to realise that escapology is not part of the act. Cardinal relies on someone in the audience to remove the bag and untie his hands – there’s good-natured applause, presumably for both the performer and the member of the audience.

Cardinal’s outrageous, self-destructive device is the precursor of a vividly surreal story about three aboriginal brothers, their mother, father and a dog named Angelina who are all having a rough time on and off the Rez. Cardinal lends his own voice to Wind, one of the brothers who is both helped and hindered by a mythical “Trickster.” He contrives a brutal tale of domestic abuse, solvent abuse and suicide.

Cliff Cardinal was born in South Dakota, the son of well-known Canadian actor Tantoo Cardinal who has had a three decade career in film. Now around thirty, he has become a staple on the Aboriginal festival circuit as an actor and musician. Constantly moving around the stage, Cardinal delivers his bleak world with a healthy dose of sardonic humour.

Cardinal’s act is laden with gratuitous profanity, but his utter lack of self-awareness works to his advantage. In terms of production quality, the show matches a fringe theatre event.