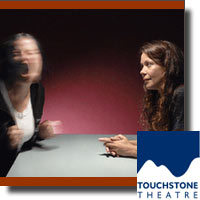 How It Works by Daniel MacIvor

The very animated Kerry Sandomirsky introduces the play with a short and witty repartee of “how it works”. A few commentaries on the quirks and complications of humanity that, as Kerry notes, are hard to explain in words; so, you just have to “see how it works.” At this, the stage darkens and we’re taken into the story of Al, a mid-forties police officer on a blind date with Christine, played by Sandomirsky.

Soon, Al’s 19-year-old daughter and ex-wife are introduced to the play. While Anna Cummer plays a very convincing 19-year-old girl with problems, I felt the quirky banter between the characters lacked a certain flow and felt hesitant at times. Each scene was packed full of silly jokes that felt almost inappropriate, and were delivered a little unconvincingly.

Although these two characters are fairly likeable, I have to admit that once or twice during the first act, I shared a look with a friend who had accompanied me to the show, at some particularly low-brow one-liners. At one particularly groan-worthy joke, I could have sworn I heard a man scoff at the same time I did. I certainly could not have been the only one thinking these jokes were a bit on the cheap side.

At the intermission, I leaned over and said apologetically to my dubious friend, “The second act is usually quite a bit better than the first act.”

And it was – it was much better. So much better that I felt guilty for having judged the play so harshly, like a relationship where you have given up on someone, and then they do something so redeeming that you feel sorry for ever having doubted them. Sandomirsky as Christine ‘takes on’ Al’s teenage daughter, and all of a sudden her character takes a whole different dimension.

The animated, grungy drinker and nervous jokester turns into a calm, confident, and sober listener. She plays counselor and decoder to Brooke and her troubles (that somehow went fully unnoticed by her father and mother). The switch in Sandomirsky’s portrayal of Christine was like switching from a loud, obnoxious MTV reality show, to a more thoughtful and relevant one, such as A&E.

The stage set-up was well put together, and had four different spaces. Each space was used effectively to indicate a different scene (for example, two benches and a table showed the switch to a pub scene; a bare area was used for the police station). Not too many props were used or needed to give life to what was going on between the characters on stage.

The one thing I couldn’t forgive was what I felt to be a very cliché use of the song “Hurt” by Nine Inch Nails, not one, not two, but three times throughout the play. Granted, the third time was Johnny Cash’s popular version of the song, and yes this play deals with drug abuse, but I couldn’t help but wrinkle my brow every time the song came on in the more serious moments of the play.

It was difficult to review this play, since I had a bit of a love-hate relationship with it. As Sandomirsky says in the beginning of the show, it’s hard to explain in words – you have to go see the play to understand “how it works.”