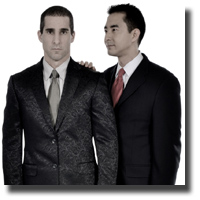 Walt Morgan returns home after many years away to rural Saskatchewan with his partner, Ray to attend his father’s funeral. Sad memories go back to a time when at the age of 17 Walt was ostracized by his parents for being gay. He was told to leave and never to return. Now Walt returns after reading a letter written by his father stating how sorry he was and that he truly loved his son. Walt also finds out that his name is in the will along with his brother Tobey and sister Claire. Now that he is back Walt is confronted with his mother’s alcohol problem and the family is perplexed about who the source is that is sneaking booze to their mother.

The troupe did a fine job when “Plan B” went into action. Brenda Matthews filled in as the mother, Adelaide Morgan for Sue Sparlin, who unfortunately wound up in hospital and was unable to play the part. Matthews had only two hours to rehearse. She read from a script without missing a beat and gave the audience the impression that she was just casually reading a book. Her acting was so good that the script disappeared beneath the blankets so to speak and you would never have known that she was filling in. Since Adelaide Morgan (the mother) is such a big part of this production, I know that the cast would agree that Matthews saved the show.

This is one of the best theatres for stage design and wardrobe. Clearly more effort is put into place at the Raving Theatre than many of the performances that I have seen in recent times. Funding or no funding this little theatre makes do in a grand way. The props and lighting were professionally done with color and hominess just like the title. The sound was a tad on the light side but was still audible.

All in all this was a good performance and Director David Blue did a fine job.

Yes we all have dysfunctional families to some extent. Sometimes we’re accepted and sometimes we’re not. Hopefully we all find solutions.

The last day is April 15 so head down to the PAL Theatre; enjoy this performance and the lovely flowering terrace during intermission.