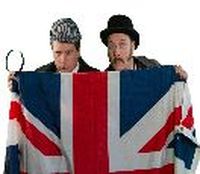 Now this is entertainment! Sheer fun with Damon Calderwood as Holmes and Gordon Roberts as Watson. A delightful whodunit comedy, mystery, musical with Sherlock Holmes and his faithful partner in crime. Dr. Watson.  It is about outwitting the evil Professor Moriarty (Chris Robson) and saving the Royal Family.

Sir Arthur Conan Doyle, who was a Scottish writer/physician, wrote the first crime story  in which he created the character of Sherlock Holmes back in 1890 and his books  have become a classic read ever since.This is my first time at the Kay Meek Centre and it is architecturally very beautiful with lots of glass and inlaid wood doors.

The performance starts out with Holmes and Watson standing in the evening fog of London. The acting ability of the duo, Calderwood and Roberts, is amazing. Their interaction is smooth and hilarious. Both actors are extremely animated and Calderwood has great quirky body movements that bring on laugher.

The dialogue between the two is fast, smooth and distinct. When they appear in robes from the Far East, Watson, who has been partaking in hash in a hookah, does a dance number bringing the house down in laughter.The stage design, costumes, music (Renee Bulat - viola/ Robson - piano) are great. The stage décor is turn-of-the-century with red walls and wood furniture. Costumes are colorful and hysterically funny at times.

I don’t want to spoil it, so I won’t say why.It takes great talent to remember all those lines without missing a beat for an hour and forty minutes. They did what they set out to do and that was to entertain and make people laugh. Calderwood and Roberts are multitalented with their singing, acting, and showmanship.

David James as Freddy Fish and also Moriarty did a bit of vaudeville in one of the opening scenes that was also fun, setting the mood for the performance. I am highly recommending this show, so take the whole family.