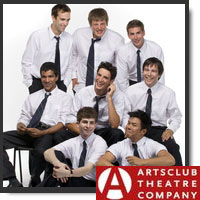 The History Boys by Alan Bennett

A West End hit and a highly successful film, The History Boys is given a splendid Canadian debut with this troupe of accomplished actors and in this intelligent production of Alan Bennett's witty, theme-filled play.

One would, however, wish for some judicious cutting, the framing of the first and second act as in the film could easily go, as a three-hour evening, with numerous scene changes, begins to feel very long. Shakespeare is snipped regularly, and the modern theatre ought to feel freer in this respect than it does.

But reverence rules in such things and in the tyranny of realism, and the boys here sport variably successful English accents in this ruthlessly English play, that point being made perhaps by the Union Jack sprawling over the whole floor at the opening. Any transition to a North American context would, however, have required wholesale re-writing since the in-jokes and nuances are wholly context and culture dependent.

But if not the play, whose core nonetheless does communicate, history being a lot more than "one damn thing after another," the acting's the thing here, and this is no less than a triumph, with a solid cast without a single weak link.

Bernard Cuffling brings off a tour de force as the bumbling but soulful Hector defeated but unbloodied by life. He is ably abetted by the other adult actors, with Duncan Fraser a parody Headmaster and Jane Noble as a finely cynical Dorothy Lintott, the history teacher whose understanding of the here-and-now is impeccable.

Kirk Smith's Irwin, the neophyte teacher and poseur, lacks a bit of fire-in-the-belly, and his ambivalence about life and himself comes off more as awkwardness than as insufficiency. His passiveness serves him well in the scene where Dakin, grabbing life with both hands, offers him more than an afternoon tryst but a date with his real self, which, as Fate intervenes, is never kept.

The boys are all convincing, even astonishing, and never flagging for a moment in keeping up the dynamics of hormonal excess and self-discovery. Charlie Carrick is a star as the supremely sexy and self-aware Dakin, his gestures and physique moulded for maximum impact.

Daniel Karasik's Posner is likewise a real creation, although it takes a little while for him to establish his crush on the class beauty. Danny Coleman proves exceedingly accomplished as Scripps in the other major role for the lads, playing the piano with throwaway skill and ably acting the ever sympathetic listener.

The play is about so many things -- Truth, with a capital ''T" being one, and the compromises of life another -- and some of these are blurred not so much by this production but by Bennett's very, perhaps over eager, cleverness, as if the star pupil needed to shine.

The division into a rollicking, laugh-a-minute first act and solemn, even sombre, second is part of this mix, and it takes a fine cast and director -- and the Arts Club definitely has these here -- to pull the rabbit out of the hat. It does so with aplomb. Kudos all round.