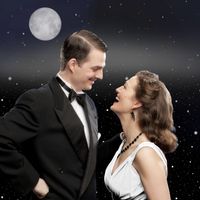 Despite the squeaky turnstile set in the first act which was greased eventually for the second act, this production was delivered quite sparkingly. When you have Cole Porter tunes such as “Who Wants to Be a Millionaire?” and “True Love”, you can't help like this show.

Naturally, when you start comparing legends like Grace Kelly, Bing Crosby and Frank Sinatra who did the original musical on film to our local actors, there's obviously no comparison. But the fact is I enjoyed the show on opening night, and so did the audience. It wasn't one of those standing ovation shows like Les Miserables, but all in all, it was a delightful performance by these fine actors and singers.

I particularly enjoyed Uncle Willy played by Norman Browning and Bridget Esler as Dinah, the younger sister of Tracy Lord (Jennifer Lines), the star of the show .

Steve Maddock as George Kittredge was funny. He reminded me of Will Ferrell, and he played his part in an almost tongue-in-cheek fashion. I also enjoyed the way the five members of the ensemble who played the servants in this show continued singing as they changed the sets. Nice continuity.

Kudos to Bill Millerd for another delightful mise-en-scene, and particularly to the choreography of Valerie Easton, the musical direction of Ken Cormier, and the set of Alison Green who got a warm applause for her design.