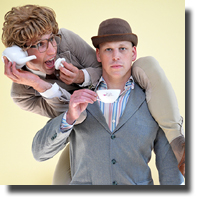 From the first moment of this play, I thought I’d entered a looney bin. The tortuous physical contortions of Jamesy as he got tea ready for his friend’s visit had me thinking that words like “exaggeration” and “ridulous” were as bland as flour paste. The arrival of James did little to warm me to this new experience - for a time. Gradually, the audience was drawn into their fantasy, and I could join their numerous fans in the audience in “seeing” what they were manufacturing out of sheer imagination. Then, as I realized that they wanted the audience to play with them, I got into it.

It was weird fun, then, to join them on their adventures as “high tea” exceeded “high tide”, and flooded the world. We found ourselves on a quasi ark, and asked to prove our presence as creatures on it. Audience members ably took key roles in the unfolding story that the duo created.

Did everyone survive the adventure? If the adventure is that laid out by James and Jamesy, you can rest assured, we all made it home safely. If the adventure is a journey into a zany brand of comedy, then I have to say it turns out it wasn’t a looney bin. It was a play pen. I’m still rubbing off the sand, but I might be tempted to enter again.

If you are a fan of the outrageous antics of Monty Python, Mr. Bean and the like, get ready for a ride that will take you to new places in comedy.