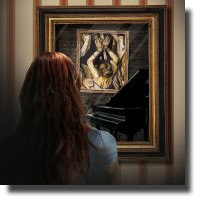 In Herr Beckmann’s People, playwright Sally Stubbs joins a growing list of storytellers that examine, or really just speculate on, why ordinarily good people do terrible things when subjugated by fear or paranoia and how they deal with their guilt long after the cause has been removed.

The titular Herr Beckmann is Max Beckmann, the German expressionist painter who served as a medic in the First World War but spent the entire WWII living in Amsterdam as a conscientious objector. His harsh grotesque style is emulated by the play’s fictional central protagonist, Anna Epp.

Anna (Dawn Petten) is an unmarried artist who has been estranged from her family since leaving Germany to live and work in British Columbia shortly after the end of WWII a couple of decades earlier. It’s now 1969 and now 40 she returns to Munich were her family still live. She arrives in time to spend the final hours with her older brother Klaus before he dies.

Determined to discover the truth about her late father’s war-time involvement as a corporal in the Schutzstaffel (the secret service wing of the Nazi party), she confronts the two surviving members of her family: her mother Clara Epp, a former concert hall classical pianist who had once played for Adolf Hitler but now only performs the occasional hauskonzert and her severely aged grandmother who vehemently holds on to her pre-war beliefs.

The Epp family’s recondite lives and relationships are played out to both Anna and the audience in a series of flashbacks as the play flips back and forth between the past and the (1969) present. Some flashbacks are Anna’s recollections of conversations she had with her Russian-born father who had been a reluctant SS officer and her brother who, as a result of his own memories of the war had drifted in alcohol abuse. Others are her mother’s reminiscences of her life as an ambitious musician and young wife.

Director Katrina Dunn brings cohesiveness to a compelling and complex drama. She elicits some fine performances from the actors while moving the story at a brisk pace, challenging the audience to search for their own answers.

Christopher David Gauthier goes for the surreal – or at least the cut-price version of it. His eye-catching set design consists largely of a twelve foot high anamorphic wall with a pair of distorted doorways – one hinged, the other sliding; a crooked central window and sheet music scattered haphazardly across the wall’s surface.

Dawn Petten gives a passionate, if uneven portrayal of Anna Epp. Her petulance was perfectly acceptable in flashback sequences but in ‘real time’ scenes her demeanour came across as being at times excessively truculent. Anthony F. Ingram as deceased family patriarch Rainer Epp turns in a well-crafted performance, displaying the nuances of a decent man caught up in the inhumanity of war. Ingram provides what little humour there is in Sally Stubbs otherwise ominous theatre piece.

Jeff McMahon’s soundscape that includes music like Beethoven’s Sonata Pathétique, as well as the Rolling Stones track that opened the second act is an agreeable component in a play that is not always that easy to watch.

Despite some shortcomings Herr Beckmann’s People does offer a pertinent story that will no doubt invoke serious discussion after audiences have left the theatre.