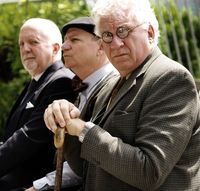 As I entered the theatre, three empty chairs sat on stage on a terrace of a seniors’ home. They are soon occupied by three elderly men who start to humorously complain about where they are and where they would rather be. The three men are WW II Veterans and the year is 1959.

Philippe (William Samples) and Gustave (John Innes) are thrilled as they stare off into the distance where their focus is on a row of poplar trees blowing in the wind. Henri (Michael Dobbin), however, doesn`t show the same interest at first. The vision of trees blowing freely gives them that sense of freedom that they so long for. Like many seniors, they gripe about being controlled by staff at the home. Through humorous ups and downs in decision-making, they contrive a scheme to escape.

The lines are funny, snarly and Henri (Michael Dobbin) and Gustave come across as grumpy old men. Philippe, on the other hand, has a gentler personality but tends to pass out periodically in the middle of a sentence which adds a funny, yet sad element to the play.

The combined years of experience of these wonderful actors is conveyed by their solid acting abilities. It was great to see them play their roles with such ease and confidence. I would like to see them in more roles, for there is nothing like being entertained by masters of their craft.

The PAL Studio Theatre is a smaller intimate theatre where I had the rare opportunity to meet the director and actors after the performance.

I would like to point out that it was a bit difficult to hear all of the lines from the back of the theatre, but the view of the stage from there was perfect and unobstructed. At times, this production was a tad on the slow side, but all in all I would give it thumbs up.

My compliments to the staff for the wonderful selection of hors d’oeuvres after the performance on opening night. They were both delicious and beautifully presented, and a nice touch to end our evening.