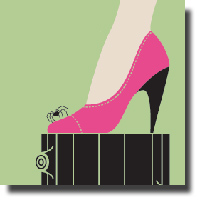 Henry And Alice: Into The Wild by Michele Riml

Michele Riml’s Henry and Alice: Into the Wild never quite makes it out of the woods. Nevertheless, thanks to Ted Roberts’ excellent set and lighting design, the woods are ‘lovely, dark and deep’. Riml’s dramedy portrays a middle-aged couple at a crossroads in their life, very much ‘in the woods’ both literally and metaphorically.

At the start of the play, Alice Lane (Beatrice Zeilinger) is in denial about the true state of their socio-economic situation. The Lane’s are on a vacation: roughing it; a camping adventure. Alice is coping. Henry (Andrew Wheeler) is over-compensating. She has a half a dozen pet euphemisms to humorously ‘sugar-coat’ the fact that Henry has just lost his career job. He has his burgeoning backpack and a back-to-nature zeal that just might eclipse his pent-up emotional angst.

As the dire implications that Henry’s sudden ‘early retirement’ has for the couple are gradually revealed, they stumble into a kind of an argumentative wilderness in which the mood created by the sometimes all-too-realistic arguments is not always lightened by the play’s ample sprinklings of humour. Wheeler and Zeilinger achieve that rare chemistry whereby the audience is made to feel they are privy to the gritty intimacies of a couple in crisis who have been together ‘forever’ but may not last the weekend.

Complicating things is the sudden unexpected appearance of Alice’s sister Diana (Deborah Williams). Diana’s presence is as intrusive as her initial appearance. Williams doesn’t dance around her roles. She is every bit as brash, ballsy and abrasive in her turn as Diana as she was in the title role of Becky’s New Car.

Wheeler steers a clear course through the sarcasm and innuendo Michelle Riml writes into his role of Henry, and it is easy to feel sympathy for his likeable character who is cut adrift from his moorings. Riml has not written as penetrating an analysis of these characters as the father/daughter ‘team’ of her earlier and superior play, Souvenirs, but it does not take much to ‘read’ some sense of irony when Henry asks for help from a higher power as he flounders about for a sense of direction in a brief solitary moment near the end of this production. What happens after this plea is revelatory.

Zeilinger has a couple of memorable moments: first, in a spotlighted aside during a ghost story wherein her character has an epiphany involving various types of cheese, that is not at all cheesy; and second, in one of several musical interludes involving a motorcycle, the old Peggy Lee standard “I’m A Woman” and the Steppenwolf classic, “Born to Be Wild”.

Despite Andrew McIlroy’s directorial efforts, and maybe more a result of the uneven quality of Riml’s play than anything else, this cast seems to have a difficult time maintaining the fluidity of the transitions that make for a smooth and progressive narrative arc.

There is no doubt that all three actors put a human face on a play that has a somewhat disjointed, uncoordinated feel to it. However, even these excellent performances cannot help but be rendered more readily as a pastiche of spontaneous personal and interpersonal responses to forces of an impersonal reality that wears many faces than as any cohesive, unified production.

Please note that blind or partially sighted patrons of the Surrey Arts Centre will be offered the VocalEye audio description at the 4pm performance of this play on January 26, 2013.