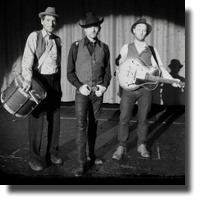 Hell of a Girl: A Cowboy-Noir Opera (part of the rEvolver Festival)

This was an entertaining, innovative and original musical and Off-Broadway in NY will surely produce this play. The actors were not only superb in their roles but also sang and danced very professionally. I'd give this show 10 out of ten for its delivery and originality.

It was indeed a unique musical theatre experience. The musical is loosely based on the myth of Orpheus and Eurydice and set in a timeless world with cowboys, nymphs and demons, and told through 26 original songs by Jeff Gladstone, Robert Service and Claire Love Wilson. The songs dealt with obsession, perdition and love.

I think this show should tour all over Canada and the USA and make its appearance in New York's Off-Broadway stage. Kudos to Director Ryan Gladstone, actors and production staff for this fabulous show.