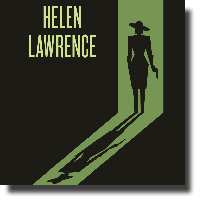 While speaking of how this World Premiere is advancing their cause, Arts Club Executive Director Howard R. Jang characterizes Helen Lawrence as “a high-wire act that is full of great reward,” and its writer Chris Haddock calls his contribution to this play’s integration of live theatre, film, and computer-generated imagery “almost as good as walking a tightrope blindfolded with no net.” All of which reminds me of Carol Ann Duffy’s brilliantly epigrammatic high-wire poem ‘Talent.’

Like Ms. Duffy’s ideal reader whose desire to see the tightrope walker in the poem fall is thwarted as he “teeters but succeeds,” Haddock’s ideal readership is an audience who wants the characters of Helen Lawrence to find some vision for the future and take a few tentative steps towards that vision.

In ‘Talent,’ “the word applause is written all over” the successful tightrope walker; in Helen Lawrence, suspense is everywhere—in each close-up, every filmed nuance, among the many image-laden shadows, behind the cameras alongside myriad unspoken glances; but above all, within and between every gritty line of its resonant script.

If ‘Talent’ is arguably as much about discourse and rhetorical relationships as it is about the extent to which audience participation determines the final outcome in a poetic product, Helen Lawrence is equal parts live theatre and live cinema performed in a postmodern praxis of Marshall McLuhan’s axiom that the medium is the message.


Helen Lawrence's titular character (Lisa Ryder) arrives in 1948 Vancouver at the old Hotel on a vendetta; it is just over a year since her husband was murdered in L.A.: she is a suspect in this murder, and she is on the lam.

Buddy Black (Allan Louis) and Percy Walker (Nicholas Lea) are two high-profile low-lifes who may have been involved. Surrounding this trifecta of turmoil are a dazzling array of lesser lights.

There is not a false note about any of these performances. Most of the actors have extensive film and television roles to their credit. They are highly skilled professionals, and their acting on opening night was consummate. Audience members also enjoyed Kevin McAllister’s scenic portrayal of the old Hotel and Hogan’s Alley circa 1948 as the player’s portrayal of the script was enacted and filmed on the spot, superimposed into these scenes, and projected in black and white onto the full-screen. The transparent screen enables the audience to simultaneously watch the actors on stage alongside the cinema rendition.

All this talk of vision and a cause can get a little heady, and it left me wondering about the heart of the matter. What if the futures of these characters is as unstable and ephemeral as the images which are used in these varying scenes? Suppose they are, as Stan Douglas who conceived this play suggests, depicting “relationships that could change at any moment”? Can their vision ever be realized?

The ultimate irony comes with Hotel concierge Julie Winters (Haley McGee). As arguably the biggest chameleon of this versatile cast, McGee’s performance is possibly the biggest stand-out performance of the play. Adding even more suspense to an already suspense-laden conclusion, she leaves the stage with trickster Rose George (Mayko Nguyen), saying “we could go anywhere.” Where they go, and whether they or the other characters still left alive “teeter but succeed” is as much a function of the audience as it is of the setting and the characters. The irony of the medium is that not everything is as black and white as it seems. And that may well be the bottom line vision.

There is ample talent here, and as in Ms. Duffy’s poem, the audience gets to play a hand in deciding on the message to be sent, and whether “the word applause is written all over” Helen Lawrence.