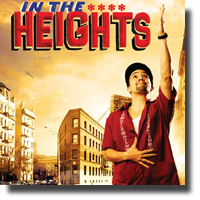 After all these years directing Musical Theatre, Bill Millerd has a keen instinct of directing the right musicals at the right times. Arts Club ends its season with something unique: a Latino musical.

Set in New York City’s vibrant and tough Washington Heights neighbourhood, this Tony Award–winning musical tells the universal story of finding one’s place in life. Luc Roderique (Usnavi), the main protagonist, was the right choice for the role. He even looks like Lin-Manuel Miranda, the Tony-Award winning lyricist and composer of this musical, who also played this character in the original Broadway production.. Roderique's singing and his hip-hopping moves were superb.

The fabulous dance moves of Julia Harnett (Carla), the charismatic Irene Karas Loeper (Daniella) and the sexy Alexandra Maclean added spice to this musical. Michael Antonakos (Piragua vendor) had the perfect Latino accent as he peddled his piragua, and last but not least, Caltriona Murphy (Camila) and Francisco Trujillo (Kevin) played their roles to the T as the concerned parents of Nina.

Ken Cormier and his band got those Latino music numbers right on, and I could see the audience tippy-tapping with the music. Kudos to the actors and production team for coming up with a marvelous season ender.