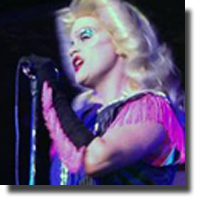 Hedwig is back in Vancouver for a return engagement! John Cameron Mitchell’s counter culture musical phenomenon gets remounted (again) at the Cobalt Hotel on Main Street courtesy of Ghost Light Projects.

When Mitchell, writer and title role originator teamed up with lyricist Stephen Trask to create this off-the-wall, gender bending camp theatre, it gained an immediate cult following. It has since become an equally popular cult film, with Mitchell once again in a tour-de-force performance as Hedwig (an obtuse wordplay on head and wig) coupled with a hefty glam rock soundtrack.

The story of a transsexual who suffers a botched sex change operation to get her ticket out of East Berlin, only to find that a year later the Berlin wall comes down anyway does seem an unlikely premise for a rock odyssey. But the show’s construct allows the audience to feel part of the opening night of a Vancouver gig of Hedwig.

An "internationally ignored" transvestite rock star, (she) punctuates the songs that span a range of moods and styles, with a narrative of her past struggles and her search for identity. The Cobalt in its own way plays an intrinsic part of the subterfuge as a third level venue that Hedwig is reduced to playing.

Ryan Alexander McDonald is outrageously androgynous as the luckless, transsexual punk rocker from “Eest Berrrleen.” As a singer, McDonald’s vocal prowess is never in doubt. He even attempts to emulate the East German accent that was such a vital component of Mitchell’s original performance. From the edgy rock anthem, "Tear Me Down," he shifts effortlessly into the subdued, "The Origin of Love". He also manages to capture the poignant optimism in the show’s best-known song, "Wig in a Box". McDonald seems a natural as the over-the-top, vamping Hedwig.

Lee McKeown plays Hedwig's comically epicene sidekick Yitzhak. The dynamics of their relationship is not always clear, but that hardly matters as she delivers her share of the vocals without being completely eclipsed by her more flamboyant co-star.

The four-piece Kat Gillis Band are capable musicians who not only provide a pounding rock score, but act out the appropriately disinterested shtick of Hedwig’s side band, The Angry Inch.

Though closely structured, the show manages to come across as chaotic and improvised. If you find regular musical theatre too cloying and rock shows too pretentious, Hedwig’s Cobalt gig might just be right for you.