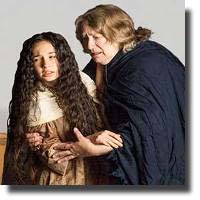 As Greek tragedies go, Euripides’ Hecuba ranks among the most poignant. Modern audiences can readily relate to the political mindset that fuels those pragmatic military men who exercise absolute control in a chaotic world. Timeless themes of justice and order, murder and mayhem run parallel to the ideal virtues of honour and courage as the titular character vacillates between acquiescent appeals to those in authority and an outraged sense of defiance that vindicates an impetus for revenge.

Hecuba was once a powerful ruler who had a large retinue of female servants at her command in Troy. We know how this story ends. But the United Players’ actors assembled on stage for this powerful production take pains to see that it is all told again with as much style and substance as they can muster.
At the start of the play, the Greeks have ransacked Troy and sailed home with Hecuba and the Trojan women as slaves. They travelled as far as Thrace before the winds died.

Now becalmed they must appease the gods and the dead spirit of one of their slain war heroes, Achilles.
Achilles demands a young virgin be sacrificed at the alter and Hecuba’s daughter Polyxena has been selected. Thus begins one of Hecuba’s several appeals to the Greek powers that be.

Before the play is over she will be refused repeatedly, pushed almost to the breaking point, and left to reason out and administer her own brutal brand of justice. Nicholas Kilmer has penned a new, astonishingly accessible adaptation of Hecuba specifically for this world premiere, and it does not disappoint.

Even more importantly, as director Charles Siegel commented, the collaboration of cast and crew is what gives this production its unique vigour and vitality. In fact, this production itself is even more accessible than the script, and more compelling than any other version of this play I have seen.

Joan Bryans gives a solid, understated, highly intelligent performance as Hecuba. Emotionally-controlled and with a smouldering resilience in the face of injustice that gradually intensifies as more and more wrongs are done to her and to her family, Ms Bryan gives her character just the right blend of flexibility and determination to make her both incredibly human and inhumanly credible.

Mac Dodge gives his Odysseus an air of stolid insouciance; Robert Ruttan’s Agamemmnon shows with his irony that his character is so much more than just appearances; and Chris Robson is by degrees, logically passionate and emotionally intense in his portrayal of Polymestor.

Two features detract from the overall excellence of this production: first, there is the costume choice to have relatively period-specific garments for the slaves as opposed to the decidedly dubious modern military apparel (replete with holstered pistols); and second, there is the all-too-frequent roaming of Hecuba out of centre stage into the ‘wings’ where she delivers her lines out of sight and hearing of many audience members.