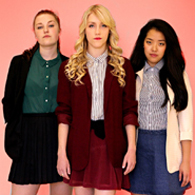 The Waterfront Theatre, nestled in the heart of Granville Island, presented Heathers: The Musical, a production by Fighting Chance based on the 80s cult classic movie. Director Ryan Mooney has won multiple awards for past musicals, including Rent, Into the Woods and Sweeney Todd. He is now adding Heathers and American Idiot to his repertoire.

The musical is based on the feature film where Veronica, a teenage social pariah, is befriended by the Heathers, which encompasses the three most popular girls in high school named… of course, Heather. Without giving away the plot, Veronica takes it upon herself to restore social justice in the institution that molded each one of us, better known as high school.

Those that attend should know that this is community theatre put on by a non profit organization. This isn’t negative given their funding as a non-profit, but for those who are expecting a large production in a venue with impressive sound and lots of set changes like the Queen Elizabeth Theatre provides, this might not be the venue for you.

I would venture to say the first target audience would be our ‘cult classic’ follower, similar to the Rocky Horror Picture Show crowd, who, at Halloween go to underground theatres such as The Vogue to throw rice at the screen during Brad and Janet’s wedding. My personal thought is that they might be slightly disappointed as they will compare the musical to the film they treasure so dearly, such as when Heather Chandler died and fell through the glass table in the movie versus … won’t give away the spoiler!

I believe the “newbies” who haven’t seen the original Heathers movie will be very entertained and recognize modern pop-culture references that flicks such as Mean Girls, Clueless (Whatever!), High School Musical and more were inspired from.

Transposing a very well known cult classic movie like Heathers into a musical as well as hosting it on a stage with minimal real estate is a very daunting task! Fighting Chance Productions did it justice in numerous aspects, especially through the cast who truly embodied the emotions of the characters from the original film.

I hate to admit that I personally fall into the segment who loved the Heathers movie, growing up in Chilliwack in the 80s. I believe this story with its principal theme of rejection and self acceptance is still timely and relatable… especially the 80s generation who are now having their own children that will enter high school one day. The ‘high school scene’ hasn’t entirely changed from then, proven by what we witness in the News that is highlighted by teen shootings, bullying and suicides.

“What’s your damage?” This is the tagline from the original movie and the redone musical. To answer that, you’ll just have to watch the performance and then ask your inner Heather or Veronica.