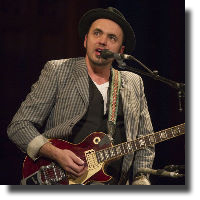 The God That Comes by Hawksley Workman & Christian Barry

For Hawksley Workman’s solo performance show The God That Comes, the Cultch’s Historic Theatre takes on the look of a cabaret club. Eight round tables covered with red tablecloths are arranged between an elevated stage and the rows of regular seating. Executive director Heather Redfern wangled an intermission before the show even got started to enable patrons to grab a glass of wine. Not such a bad idea, since the production’s theme goes down better with a drink in hand.

Rock music and theatre have long enjoyed a benign association, but combining a concept album with a Greek tragedy is a stretch even for the enigmatic Hawksley Workman. Workman and his co-creator Christian Barry have taken their inspiration from Euripides’s play The Bacchae.

Its complex story involves the androgynous Dionysus, the god of wine, theatre and sexual ecstasy. A god that induces having a good time can be pretty easy to take and before long women and slaves are heading up a mountain to worship him. This aggravates Pentheus, the king of Thebes who disguises himself so he might infiltrate the horde and observe the proceedings. Alas, it ends badly when the women mistake him for a beast and tear him to pieces.

Workman is a better performer than a storyteller, so he opens the show with a prologue that guides the audience through the grisly plot – a misguided device in my view. If anyone in the audience was sufficiently interested in this piece of Greek mythology, they would already know about it. Chances are, most were there for Hawksley Workman’s music.

The broad narrative is driven by Workman’s original compositions and musical fragments from well known songs. In one instance he blends “Battle Hymn of the Republic” with his own gender-bending “Ukelady Boy.” With songs such as “If Your Prayer” and “Up,Up, Up He Goes,” Workman fills out the sound with some heavy-handed sampling and looping.

Workman uses his voice dynamics to represent three main characters: the god, the king and his mother (he uses something close to falsetto for the god). Just in case you don’t get it, there are mannequin heads lit with a spotlight when the appropriate character is featured.

Workman closes the show with a song that has little (if anything) to do with The Bacchae. “They Decided not to Like Us” works more like an epilogue about taking candid photos on a mobile phone, then accidentally leaving it in the back of a taxi. That shouldn’t happen to anyone!