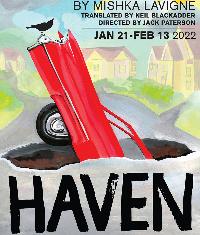 Haven is a new Canadian play by Mishka Lavigne, translated by Neil Blackadder into English from the French language drama Havre.

Elsie has just lost her mother through a terrible accident on the west coast. Elsie is her only family and without any chance of ever finding her mother's corpse, she has to find her own way of saying goodbye. Matt left Sarajevo as a child during the Bosnian War in the early nineties and was adopted by a Canadian couple. He has not managed to retain much of his native Bosnian language. Yet he feels a natural urge to travel to Sarajevo to search for any information leading to the identity of his biological parents.

Each character deals with their adversity in entirely different ways. For the first half hour of the play, the dialogue is delivered in a narrative form, with actors alternating accounts from opposite sides of the stage - almost as if they were in two separate plays. The dialogue shifts to conversational form when Matt and Elsie come together fortuitously as a result of a huge sinkhole that opened in the asphalt and swallows a car on Elsie's street. Matt finds a book in the vehicle - the only object he finds of value. The book is titled "Haven" and written by Elsie's mother, Gabrielle Sauriol.

Tina Georgieva and Alexander Lowe deliver convincing, nuanced performances, particularly Georgieva who carries the play's heavier dialogue and is also responsible for the larger share of the stage movement. Except for the final scene, their infrequent direct connections seem (probably intentionally) awkward. But they show that reaching out to a stranger can have a reward.

Director Jack Paterson, who has experience with works translated between French and English, maintains an even pace in what is a multi-layered production. Following the storyline is challenging, but manageable.

Joel Grinke's minimalist set, while unusual for a theatrical production, is fairly commonplace around the streets of Vancouver - a roadworks site, complete with yellow alert tape and safety cones. There random of piles of books scattered around the floor and on a table outside of the construction area. There is some difficulty in being able to realise the set as also having to work for two characters in divergent scenes.

Mishka Lavigne's storytelling provides us with a fine example of the resilience of the human spirit.

If you get to Jericho Arts Centre early enough, there is a pre-show video of post lockdown Wuhan, China, where the first known infections from SARS-CoV-2 were discovered.