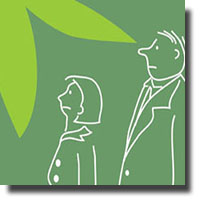 It’s time for Charlotte and Allan Duncanson to sell the farm that was handed down by Allan’s father and move to a condominium in a nearby city. They sell the land to their neighbour, but rent the farmhouse out to Ron, an airline pilot – or so he claims. “We don’t want to be nosy landlords” the couple naively reiterate throughout the play, which is just what the tenant wants to hear. The couple blissfully ignore obvious signs (and there are many) that something malodorous is afoot.

Barrett and Mann use a modified Brechtian technique to directly address the audience. They also use a brand of "swap n’ share" where the pair advance the narrative by taking on numerous personas with dextrous comedic skill. Some characters require the audience’s focus in determining gender, but the device does provide much of the play’s humour.

Eileen Barrett and David Mann pull off the roles of the quirky quarrelsome couple with aplomb. They display an on-stage harmony that depicts a four decade marriage.

Director Jovanni Sy expertly guides the show at an even pace while keeping the heart of the playwright’s ‘home-grown’ (pun intended) comedy on track. Lauchlin Johnston’s set of the Duncanson’s outdoor raspberry patch and a rolling reverse doorway is simple, but effective.

I would have preferred the two short acts made in a single long act. However, the play’s scope and size make it a natural fit for Gateway Studio B’s theatre space.

Harvest is a cautionary tale – of sorts. But it’s also a story of perseverance and maintaining grace, regardless of how bad the situation seems to be.