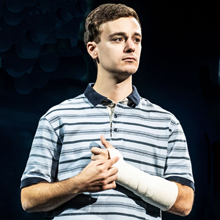 Dear Evan Hansen is a darkly-themed high school musical based on the book of the same name by
Steven Levenson. It tells the story of a socially anxious teenager (Evan Hansen) and an innocent
misunderstanding that turns into a disastrous web of lies. When a classmate (Connor Murphy) takes his own life and is found with Evan’s self-addressed therapy homework letter to himself, the presumption that the two were friends is perpetuated by Evan by way of fake email exchanges, constructed with the help of Evan’s classmate, Jared.

Although this powerful and enormously popular musical addresses suicide, bullying, depression, and the problems of social media, the musical numbers are anything but dismal, with upbeat, catchy and downright anthemic pop rock songs written by Golden Globe and Oscar-winning musical veterans Benj Pasek and Justin Paul (of La La Land and The Greatest Showman fame).
The role of Evan Hansen was performed by Sam Primack for opening night, and he magically combined Evan’s endearingly awkward mannerisms with tremendously powerful vocals that were simultaneously vulnerable and unfettered.

The supporting cast offered up powerhouse performances as well; Stephanie
La Rochelle as Connor’s sister, Zoe, brings Sara Bareilles-esque vocals that are sweet and pure, truly capturing an emotional fragility and excellent on-stage singing chemistry with Primack’s harmonies. Also worthy of mention are Alessandro Costantini and Ciara Alyse Harris, who play Evan’s classmates, Jared and Alana respectively. With excellent comedic timing and quirkiness, Costantini’s Jared is reminiscent of Superbad’s Jonah Hill, skillfully balancing vulgarity and humour, with the earnestness of a teenage boy. A highlight is the musical number “Sincerely Me,” which is the soundtrack to Evan and Jared’s fake email writing scheme, and is lousy with fancy handshakes, high fives, and enjoyable dance steps. Similarly, Harris as Alana provides comedic relief with her precocious “Type A” personality, helping to transition the audience through a few particularly tense and emotional scenes.

The stage set-up also deserves acknowledgement, featuring an almost perpetually darkened stage that is crowded all around with large tv screen-style panels that distractingly and relentlessly scroll through various types of social media throughout the performance – twitter, instagram, facebook – effectually reflecting the over-anxious mind of Evan (and let’s face it, any one of us). The numerous panels add to the anxious and nervous feel of the play and (spoiler alert) only disappear from the stage in the final scene, where the stage brightens to an almost blinding blue light, perhaps matching Evan’s unburdening and giving us all some relief from the darkness.

When interviewed, the original Broadway cast said they found the inspiring nature of the story hugely impactful and compelling, and a key motivator for driving them to perform exhaustively night after night on tour. And while the reality of living and struggling with anxiety isn’t always as optimistic or as easily alleviated as this production suggests, Dear Evan Hansen is definitely a worthwhile show for parental and teenaged humans alike; it reflects what it means to be alive and functioning in this world, and is the type of performance that reaches all of us and connects with a part of our heart that sometimes feels lost, giving us a sense of hope and a reminder that we are all really just hoping to be found.