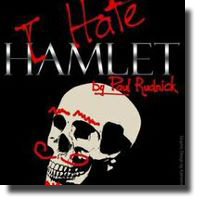 This is the final show of White Rock Players' season. Opening night got the audience standing in ovation during curtain call, appreciating the fine and comic acting of the players. Standing out in the cast was John Cousins (John Barrymore) as he portrayed the role of coach to Matt Loop (Andrew Rally), a young and successful television actor who relocates to New York.

In New York, his agent, Sheila Keating (Lillian Troy), a former lover of Barrymore, rents him a marvelous, gothic apartment owned by Barrymore. And this is where the fun begins: Barrymore returns as a ghost and convinces Rally who hates Hamlet, to love Hamlet.

The opening night audience was delighted with the performance. I particularly enjoyed the sword fight between Barrymore and Rally. Kudos to Director Dale Kelly, the actors and the production staff for a truly zany production. Right before the show, the president of White Rock Players announced the upcoming repertoire of plays which starts off with Death of a Salesman in the Fall and Cinderella for the Christmas Panto.