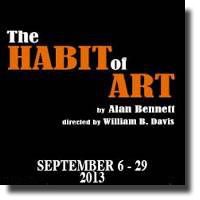 United Players
The Habit of Art by Alan Bennett, directed by William B. Davis

Ever wonder what it would be like to be an unobtrusive observer during a theatrical dress rehearsal of a particularly fascinating play? Alan Bennett has scripted a brilliantly tight bio-drama with acute psycho-sexual overtones in an ideologically fascinating play about a play concerning W.H. Auden, the poet, and Benjamin Britten, the composer, along with all of the cast and crew involved. The play is called Caliban’s Day and it is set in 1972.

Naturally, there are meta-theatrical interactions aplenty, and thoroughly enjoyable rejoinders about actors, poets, music and amusing theatrical devices abound. The humour ranges from droll to irreverent; from intellectual to ribald; but always with an inventive and vitally engaging bent.

Director William B. Davis once again proves himself to be an actors’ director, playing up nuance after nuance of the emotional entanglements, not only with respect to his principals, but also the brightly shining lesser lights, and yielding up collaborative, interactive excellence in a highly watchable play.

John Prowse does an admirable job of acting as the seasoned veteran actor Fitz playing W.H. Auden. His curmudgeonly oracular masculinity is portrayed with a vivid ineffable skein, a deeper than deep unconventional philosophy that just skims the surface of sensuality without once biting into the poisoned apple of sentimentality. Despite, or maybe because of an unexpectedly erudite crassness, Prowse’s seemingly effortless charisma makes his portrayal of Auden endearing.

Murray Price performs his Henry playing Benjamin Britton with a placid, stoic, unsentimental air of insouciance, a perfect foil to Prowse’s irascible Auden, and highly congenial and likeable for all his avuncular stiff upper crust veneer.

A long time before the actors appear to open the scene on this no-holds-barred, run-through of a play-in-progress production, George the Assistant Stage Manager, played with an unassumingly offhand precision by Attila Kállai, begins the process of scattering various old clothes and crumpled up newspapers around the most cluttered living room of a set imaginable, literally upsetting the stage.

Closely mirroring the random haphazard clutter of the set, this play about a play, is periodically punctuated in progress by pre-production discussion. The director of Caliban’s Day has cut chunks out of the play, a feature its author, Neil, played with understated panache by Mac Dodge, is only just now discovering, to his utter chagrin. His subdued but voluble outbursts prompt considerable eye-rolling on the part of the Stage Manager, a role that is given solid definition and distinctive credibility by Ms. Joan Bryans.

There is seemingly no end to the amusing exchanges between Dodge’s authorial character and the character Donald, who plays Humphrey Carpenter (Kurtis Maguire), ostensibly the biographer of the two principals, but for the purposes of the play a mere ‘device,’ ubiquitous maybe, but a ‘device’ nonetheless—a feature that proves to be the source of great consternation and emotional duress, and no small amount of hilarious humour when Maguire’s Donald opts for a ‘musical’ embellishment.

In the end, this play about a dress rehearsal is just as much about popular morality and examining if not pushing the bounds of public decorum and decency as it is about the reunion of two old friends—Auden and Britten. Ultimately, it may be a lot less of who is known than how you know what you know. There is plenty of elegance, charm, wit and humour to go round in this compelling dramatic piece of meta-theatre, and it may go a long way to proving that for many people the habit of art, is not so much an acquired habit as it is a required habit. You will definitely want to see The Habit of Art to consider whether or not you are one of those people. Or just to have an incredibly good time. I know I did.