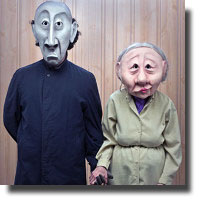 Grim and Fischer is a 50-minute, single act dark comedy that Kate Braidwood and Andrew Phoenix initially developed as a full-face mask Fringe Festival production. Cultch executive director Heather Redfern saw the show at the 2011 Vancouver Fringe and liked it so much that she has included it in the 2012–13 programme.

The show’s simple premise has aging nursing home resident, Mrs. Fischer encountering the Grim Reaper. Mrs. Fischer has been served with the Reaper’s dreaded black envelope, but perspicaciously avoids opening it. The old lady has had better days, but she is definitely not ready to heed the Reaper’s summons. What then takes place is a slapstick form of a cat n’ mouse game with the Reaper coming off second best.

Behind those papier-mâché masks are performance artists and co-creators, Kate Braidwood and Andrew Phoenix. Braidwood, naturally, takes on the role of Widow Fischer, which she handles with just the right amount of vulnerability and mischievous mettle. Phoenix plays both Grim and the male nurse who frequently finds himself the target for his charge’s practical jokes.

The show may not be brilliant, but it is exceptional. It’s performed entirely in mime, and while there is no dialogue – there is a lot of noise. Braidwood includes in her sound design excessive measures of gunfire, emergency vehicle sirens and cacophonic television shows. She makes up for it some way with an evocative soundtrack that includes Chopin's Nocturne at the beginning and the Bee Gees “Staying Alive” that becomes a recurring musical pun.

Grim and Fischer is whimsically macabre. It’s a ‘must-see’ for anyone who has lost someone they loved, or will do one day – which is all of us.