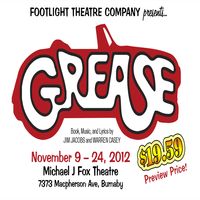 Despite a few technical glitches on opening, this cast received accolades and a standing ovation at curtain call. The performance, the costumes (Christina Sinosich), the singing and dancing were fantastic, almost at professional level.

Director/Choreographer Lalaina Lindbjerg Strelau did a fantastic job with these talented actors. Likewise, Monique Creber and Tom Arntzen (Musical Directors) did wonders with the singing prowess of these young thespians.

This was a large cast headed by  Alex Gullason as Sandy, Lucas Blaney as Danny, Craig DeCarlo as Kenickie, and Jennie Neumann as Rizzo. This classic 1950s sort of "corny" story about first love, teenage cliques, fast friends, sworn rivals, great cars and goofy teachers got the opening night audience young and old singing and clapping along with the pop rock hits “Greased Lightnin’”, “Summer Nights”, “Mooning” and so many more.

I found myself humming “Hopelessly Devoted To You” as I left the theatre. The songs were really catchy, and you'd remember them for hours after the show.

I've enjoyed past musicals by Footlight, and have seen and reviewed Joseph and the Amazing Technicolor Dreamcoat (2009) and The Wizard of Oz (2011). Producer Angus Chu gave a brief intro before the show started with the usual "pass the good word around about this show". And I hope this review gets to readers so they can see for themselves what a good show this is.