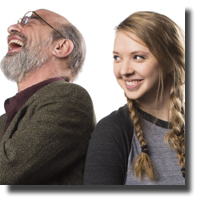 It’s always a worthwhile experience seeing a new Canadian play and this one is as good as they get. The Grandkid is Queen’s University drama professor, John Lazarus’s two-handed comedy about the reset relationship between twice-widowed Professor Julius Rothstein and his granddaughter Abby, who has come to live with him for her freshman year of university.

Growing up in Victoria, Abby has fond memories of bonding with her Zaide, who was always more liberal than her parents could be. They typically address each other as "Rothstein" by way of personal protocol in sharing the family name. So, despite their difference in age and gender, the two are determined to get their arrangement off on the right foot. They even jointly compile a set of rules that will be (hopefully) mutually beneficial.

As it turns out, age and gender are the least of their differences. It’s the philosophical schisms that cause disunion: Julius is a traditional Jew, Abby is closer to her Gentile mother than her Jewish father, he is an academic, she is a jock. Notwithstanding their best intentions, the pair inevitably clash passionately over Zionism, and the fate of a failing local cinema. Communication breaks down completely when the younger Rothstein hosts a party in Julius’s absence and without his consent, and worse, one of her class-mates damages a family heirloom. As a result of the altercation, Abby walks out.

It was certainly absorbing to witness the natural chemistry between veteran stage actor Richard Newman and emerging talent Pippa Mackie. And of course, their characters Julius and Abby reconcile in the end. Newman shows a light comic touch and is totally convincing as the reformist professor. Mackie also acquits herself well as the down-to-earth 'grandkid' managing the tension without overplaying the title role.

Director Natasha Nadir brings out the strong characterization and production quality we’ve come to expect with Gateway Theatre. The "breaking the fourth wall" device where actors step out of the story and talk directly to the audience may have been a tad over-used, but I did enjoy the alternating klezmer and folk-rock music that separated the numerous scenes.

The Grandkid is a beguiling comedy that offers as much poignancy as humour. It should appeal to grandparents, teenagers and those that wish they were either.