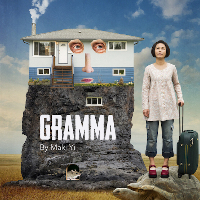 Gramma is a single-handed, cross-cultural comedy-drama by Wi-Hyung Maki Yi. The play was initially created as an intercultural autobiographical theatre project for Ms. Yi’s MFA. Though a solo performance, Yi takes on three separate and distinct roles: a Korean storyteller, the titular character who is a cantankerous elderly woman, likely suffering from dementia and a young Korean female recently arrived in Regina, Saskatchewan.

The staging wanders across two diametrically opposite worlds: contemporary prairie Canada, where the woman and Gramma live together and the rather more obtuse mythical story about Simchong, a filial daughter, burdened with the care of her blind father that runs parallel to the play’s main premise, as told through the storyteller’s imagination.

Yi’s story essentially chronicles a three-year episode of her life while studying at the University of Regina (Regina is never actually mentioned). She agrees to be an elderly woman’s caregiver in exchange for free accommodation. It turns out that Gramma was to be a more difficult and demanding companion than she could have imagined. Guessed to be in her nineties, Gramma is stubborn, impatient, hard of hearing and while thought to be quite wealthy – lives very frugally.

The more Gramma became dependant on her guest, the more demanding she becomes. But while the relationship was challenging for both, there is a point in the story when the two women find solace in each other.

Maki Yi delivers a charming performance, though her convoluted narrative of Korean mythology was hard to follow due to her accent, and despite Gramma being a mid-west Canadian, Yi gave her the voice of a hoary Korean woman.

Director Laura McLean manages to maintain an even pace throughout, allowing the performer to balance humour with poignancy.

Phil Miguel’s set has to make the best of a single set that has to summon imagination of Simchong’s story and the home that Gramma and her caregiver share. The stage floor is an odd composite of linoleum, hardwood flooring and a painted Korean landscape. Jonathan Kim’s effective lighting differentiated the hues between Gramma’s kitchen, her living room and the live-in caregiver’s basement suite.

Maki Yi’s moving story is of two women, diverse in terms of age and culture ultimately having to make accommodation to each other through their own loneliness that might serve as a lesson for all of us.