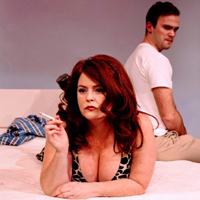 The White Rock Players
The Graduate by Charles Webb, adapted by Terry Johnson

This was quite an entertaining show, and acted superbly especially by Thomas Gage (Benjamin) the part played by Dustin Hoffman in the 1967 film.

From the many scene changes, you could tell that the play was adapted from the screenplay, and a lot of scenes from the original movie were different from the play. Mrs Robinson (Lori Watt) coming out braless in the first scene, wasn't in the film, as censorship was still a big issue then.

But all the main actors delivered superbly, especially Gage, Watt, and Janine Guy (Elaine). Kate Stadel's direction was quite good, and she surely kep the stage crew busy with the fast-changing scenes. The plot revolves around Benjamin who who comes home after graduating from college, aimless and disillusioned. His parents throw him a party where their family friend, Mrs. Robinson, makes him an offer he is unable to refuse.

The opening night audience were enthused and delighted with the play, judging from the laughter and applause. In fact, there were a few who even stood in ovation during curtain call.