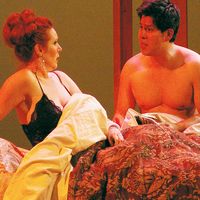 Dates and Venue May 2-23 | Metro Theatre

Terry Johnson’s adaptation of the iconic 1967 movie wasn't as good as the movie. His adaptation had very short scenes like the film. The only difference is the ending where the two lovers end up together in a hotel room. The acting, though, was great, especially the scenes between Edwin Perez as Benjamin Braddock and Kathryn Stewart as Mrs. Robinson.

The story chronicles the adventures of Benjamin Braddock, a new college grad grappling with his future. Directed by Judi Price, who is more of an improv director, I felt that some of the actors, Perez and Mariko Zamani (Elaine Robinson) were rushing a bit on their lines.

This is something different for Metro in that this is the first play I've seen where nudity, on the part of Mrs Robinson, was shown. Normally, Metro produces more wholesome comedies where neither foul language nor nudity is shown. But as a whole, the production delivered quite well.

I liked Perez's nervous delivery reflecting the young Dustin Hoffman in the movie, as well as Stewart's role as the seductress, Mrs. Robinson. Ray Knight as Benjamin's father was not too focused in the first act, grappling with his lines, but he warmed up in the second act. The other supporting actors did quite well.

The scene design by Tracey-Lynn Chermaske was simple but effective. Kudos to Metro Theatre for an entertaining show.