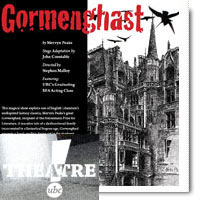 Adapting well-known novels for the stage is an extremely tricky business, the compression necessary to theatre often yielding a hodgepodge that sometimes (perhaps often) sees genuinely theatrical thrust left to the wayside. Faced with a trilogy no less, John Constable's adaptation cuts to the bare bones, and it works -- though a first act lasting an hour and a half becomes absolutely Wagnerian in proportions.

There's a lot of narrative thrust here though where it is going takes a good while to become clear: the whole is composed of a series of relatively brief and in some cases very brief images.

The emphasis thus falls less on acting -- which is often hilariously and deliberately way over the top -- than a brilliant directorial concept and an eye-candy stage set and costumes. Those and the lighting certainly rival and, for that matter, often surpass much seen on the city's professional stages. (It definitely pays to have student help.)

The production influences read like a long list: the Gothic (naturally), the theatre of the absurd, the theatre of cruelty, minimalism, the grotesque, and even stream of consciousness, for at times this is like watching a dream, or, rather, a nightmare, as images flit and fade, the profound darkness punctuated by flashes of blinding-bright light. Screams, silence and demonic laughter form the soundscape.

The large cast -- there are thirteen named parts -- conveys enormous enthusiasm and deft timing. Notable performances are those of Michael Neale as Flay, the retainer, Tianna Nori as Dr Prunesquallor whose cackling laugh is a must-hear, and Kevin Stark as the ambitious and evil upwardly mobile Steerpike, the kitchen boy with his eye on displacing Titus, 77th Earl of Groan and becoming head of the castle.

In another category is Colin Ormiston's Barquentine, whose Master of Ritual would grace any full time theatre, and Maryanne Renzetti makes of the butchering cook figure out of very dark commedia dell'arte.

There's reams and reams of plot, but, alas, not too much to think about here: evil machinations and decadence are in play, but are presented in such an absurdist manner that there's no frisson, just nervous laughter and relentless tension. As a constant diet this makes for a long evening. There's comic relief all right, but only of a very grim sort, so the tone rarely relaxes. Excess does tend towards fatigue.

This, then, is a triumph for directorial team and the players (there's no weak link), but as to whether the play's the thing ... ah, that's another question. Malloy papers it over by movement that at times plays with dance. There are songs, and there are poetic stage pictures from the repertoire of nightmare. Perhaps it doesn't all add up to very much, but it is at the least a provocative evening at the Freddy Wood.