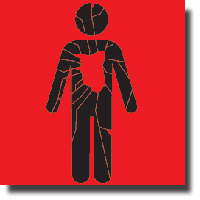 Gordon is clearly not for the squeamish. It is laced with profanity, and it has several graphic depictions of bullying and violence. That said, it is a play that dares to ask some difficult questions. Central among them: What becomes of hope in a landscape of utter hopelessness? Charting this tumultuous terrain leads Morris Panych to render improbabilities with the comic flourish of ample situational and dialogical incongruities in a manner that brings to mind a paraphrase from an original master of ceremonies from yesteryear, “Oh what depths we’ll hit. On with the woe, this is it.” Gordon is tragic-comedy at its best.

Todd Thomson imbues the title character with a kind of maniacally pathological intensity. Gordon and Carl have just left prison. Gordon is a nasty piece of work who has his flunky Carl break through the kitchen window of his dad’s run-down old house so they can find a place to crash and cook up new crimes. Thus, the play sets up its audience as witnesses to the scene of a crime that is only in its infancy. Plenty yet to come; a series of train wrecks; you cannot look away.

There is an old truism criminals like to pass around gingerly, as if on eggshells, about how one should never return to the scene of the perfect crime. Gordon never seems to give those basement stairs where his mom met her fatal final end a second thought though, and despite his good old dad’s oblique passing reference to his unspeakable act, he seems content to not only revisit things, but actually suit up for a virtual re-enactment.

The West Coast premiere of one of Morris Panych’s blackest comedies played to a packed and enthusiastic crowd. Not surprisingly, given their relationship, there is always a tight connection between a Panych script and a MacDonald set. Witness the motley assortment of relics from a bygone era that Ken MacDonald uses to furnish Old Gord’s kitchen. This set is ‘wonderfully well-worn’ pushed to the point of ‘decrepit’ and bent in the general direction of ‘worn out’ but still workable; this set makes the notion of ‘lived-in’ appear like an explosion of leftovers staining its stovetop and the oven doors, a big bang of immaculate design spreading throughout the entire room; this set leaves normal as far out of sight and out of mind as a fast-forgotten footnote in yesterday’s news, niggling to gain a foothold in the eternal now. As a vivid symbol of the diseased and damaged heart of each of the four characters of a darkly comic play, this set is a kind of fifth wheel rounding out the cast. It is a retread whose distinctive character propels the story forward with as much intensity as the explosive plot musters as it hurtles towards its murderous conclusions about life. False hope glimmers like fool’s gold among the dusty detritus hidden in plain sight alongside the shadows of MacDonald’s superb set, which is loaded with so much character that it takes on a persona all its own.

False hope slithers like a feral fog, obscuring Gordon’s sinister intent in a haze of ill-conceived ‘business plans’. Always on the lookout for another ill-gotten gain, Gordon masterminds one feverishly misbegotten plan after another, flailing to realize his true potential with all the personal panache and spiritual solipsism of a king-of-the-hill school-yard bully voted most likely to secede. The difference is Gordon is so smart he almost overlooks his blind spots. Schooled in prison, Gordon graduates from years of incarceration only to be forever ensnared in a criminal mindset. He is shackled and bound in the prison of his own making until a painful twelfth hour parole ushers in the briefest of purgatorial flashpoints. Then comes a form of poetic justice that turns this blackest of comedies tragic with a tender and oh-so-bitter-sweet twist.

Panych has crafted a candid and penetrating exploration of the social and personal consequences that arise when one fails to allow morals and ethics to discipline an unruly, brutal nature. Yet, for all its hard-hitting edginess, this play lives much of its gritty life in that Prufrockian other-world, that no-man’s-land whose characters inhabit “streets that follow like an argument of insidious intent.” Even the yellowed wood of the kitchen set seems to have descended through a yellowing fog into some nether region, heralding or harrowing some divine circle of hell. Gordon’s most candid admission comes in his response to one of Carl’s more lucid moments—a logical refutation of Gordon’s claim to be God that he follows up with the declaration that God is dead, and then caps with the admission that they are all dead. The moment is intense. The movement is immense. Some time later when Carl has his epiphany, it is surely meant to be seen as a delayed reaction to this very telling moment.

Todd Thomson presents his Gordon with a restless kind of calculated malevolence, amoral, atheistic, hell-bent on his own peculiarly crazed brand of sociopathic control. He breathes intimidation and violence and lives to dominate everyone in sight. Prone to delusion and self-deception, the audience easily sees through his self-absorbed manipulation, like when he tells his dad late in the play that “this is the world we live in; not the world we created.” Half-truths like this abound throughout this cleverly constructed script, and Thomson does an admirable job of breathing a brooding, megalomaniacal kind of life into a man who almost seems to laugh scornfully at his ability to distort reality into an artificial illusion, until he realizes he has been living half his life waiting for the hammer to fall.

Caught in the crossfire, figuratively and literally, is Melfort Carl. Carl hails from a small northern Saskatchewan town, and is arguably stereotyped as a flat character, strictly two-dimensional. Yet Patrick Costello infuses a real, almost likable haplessness into his portrayal of Gordon’s witless sidekick. From the opening scene on, it is apparent that there is one brain between Gordon and Carl, and it is clearly not Carl’s. We cannot help but recognize Gordon’s intellectual influence in his young protégé, especially when Carl cries with sudden and unexpected urgency that he is having an epiphany. So out of character is this random outburst that the audience cannot help but laugh at its preposterous portent, even as they realize the penny has dropped rather late for young Carl.

Later in the play, when Old Gord’s echoes of an earlier, more joyous remark about how his son has come home are delivered as a realization of what an ominous reality this fact really is, Andrew Wheeler’s delivery of this comment takes on decidedly more menacing overtones. Wheeler is amazing to watch as he stumbles from drunkenness into a deranged and derelict sense of duty toward his son. He is always original in his movements, gestures and facial mannerisms, always at loose ends, even as he is busily trying to steady his perpetually shaking hands to cinch the noose about his neck and launch himself out of the mess that has become his life. When he is not holding animated conversations with imaginary friends, he is planning an escape to Arizona. Wheeler is consummate as a man clearly uncomfortable in his own skin.

None of the characters are content with their lot in life. Dierdre and Carl both spend more time talking about returning to their home town than they spend doing anything about it. Pippa Mackie offers up her role as Gordon’s girlfriend Dierdre with the precision of a suspended hyphen—a front-loaded piece of plain-spoken syntax followed dramatically by a pregnant pause. Her dark eyes and her beaten but defiant manner make her stand out like a line from Culture Club’s Victims: “always there like a ghost in my dream.” The set of Gordon is not a house nor a home as much as it is a limbo inhabited by characters doomed to create their own fates in a destiny determined by deities whose design is beyond their control.

If society were a play, the laughs might not be so loud as those Gordon elicits, but the woes would likely pierce as severely, the insights penetrate as trenchantly, and the principal actors move as deeply. But it won’t move you a bit—unless you see it.