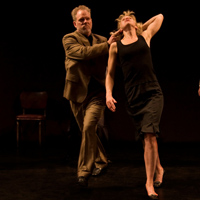 Yes, genocide can happen in any country and it has happened in many countries. Rwanda in 1994 was one of the worst in modern times. So here we have a writer Paul Braunstein (played by Michael Redhill) who is trying to piece together events that took place in 1941 that resulted in the death of 9 of his family members. We are of course talking about the Holocaust.

The Firehall Theatre’s opening night presentation of Goodness was dramatic and well acted. We were taken back and forth in time with the telling of the story to the actual events that took place so many years ago.

The wonderful sound of harmonizing voices in a chanting style with no musical accompaniment was the highlight in this performance. It had the thread of African history. The actors had great voices and great sound.

What would have made the performance more believable? Would it have been more believable if the yelling was toned down a few decibels so that the actors wouldn't be heard two football fields over?

When our writer, Paul (Redhill) is given a woman’s address from a fellow in a bar the intrigue of the story begins. The woman, Older Althea (played by Lili Francks) is a black Jewish woman who tells Paul the horrifying story that happened to her and those close to her during World War II.

This play makes us question ourselves. Do we kill outsider tribes to save our own? Yes, of course the question now becomes, “What is Goodness?”

If you are a person that gets depressed easily then this is not the performance for you. Heavy dramatic stage productions are not for everyone. If it is your niché then please take in Goodness at the Firehall Arts Centre. It is on until March 11th at 8 pm.

On a closing note I wish to say that Lili Francks’ acting was excellent and gave the production substance.