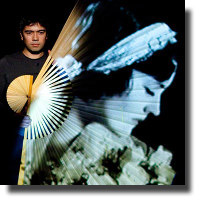 After two years of showing his biographical odyssey around the United Kingdom (and Montreal), it’s perhaps fitting that British-Chinese playwright David Yip brings Gold Mountain (jin shan) to Vancouver. California and British Columbia are still referred to as Gold Mountain by the Chinese today, though, more as a metaphor for opportunity than the actual presence of the yellow metal. The journey play is a collaboration between Liverpool’s Unity Theatre and Montreal’s Les Deux Mondes.

Playwright David Yip may not be familiar in North America, but in Britain the sixty-year-old veteran actor is well known to television viewers for his roles in series like The Chinese Detective and Doctor Who. In this project, an obvious labour of love, Yip takes on the persona of his father, renamed Yee Lui, while Eugene Salleh portrays a younger David Yip.

The use of multi-media throughout the play, though stunningly executed and definitely a production strength, could also be somewhat distracting and I found that the two performers were being integrated into the technical cleverness, instead of the other way round.

Despite the excessive use of hi-tech paraphernalia, I found myself spellbound by Yip’s story-telling of his father‘s epic quest; a Chinese seaman who comes to Liverpool after being virtually chased from his Canton village by members of the Guomindang. Liverpool in 1940 is the unlikeliest place to find a “gold mountain.” Yee Lui actually refers to his new home as “the land of milk and ghosts” yet, he somehow overcomes the odds by marrying a local girl called Mary and is then bequeathed a laundry business by his employer. Alas, fortune is followed by adversity. He loses the laundry in a poker hand, and then temporarily abandons his family. But when he turns to opium, his wife ultimately walks out on him, leaving him emotionally broken.

Yip complicates the basic story with political references to Mao Zedong and China’s war with Japan and the chaotic urban riots in Liverpool of July 1981.

There are undoubtedly hundreds of immigrant stories like this one, but they need someone with the talent of David Yip to uncover them.