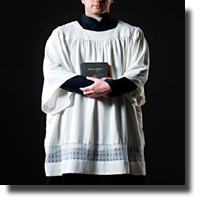 Opening night brought the audience to their feet as both actors (Lisa C. Ravensbergen and Thomas Hauff) took their bows at curtain call. For several years, allegations of sexual abuse in the residential school system has marred clerics from all denominations, especially Catholics.

Aboriginal playwright Drew Hayden Taylor’s bitter humour explores how a Cree woman calling herself "Johnny" (Ravensbergen) confronts an Anglican Assistant Bishop (Hauff) about abuses he made on her when she was a child in a residential school. The play's end leaves us in a conundrum about the guilt or non-guilt of this priest when he was assigned at St. Mark's, one of the schools in the system in Canada.

"Was he guilty or not guilty?" was the question one of the audience members was asking at the reception after the show. Although her friend answered "yes", I rather thought to myself that the playwright's intention was to leave that question hanging in the audience's mind.

Both actors delivered their lines with flawlessness during opening. Ravensbergen portrayed the role with the disgust and bitterness that called for her role as the dissipated "Johnny", physically distorted and sarcastic about her Christian beliefs. Hauff did well begging her to decide whether he was guilty or not, and accepted his fate either way. His frustration was well portrayed.

Discrimination, whether racial, sexual or otherwise has been with us from the beginning of mankind/womankind, and it will always be there until the end of humankind. But I believe there is still hope because as we approach the first quarter of the 21st century, the young people of this generation are fully aware of the political, ecological and social incorrectness happening in today's world, and are doing something about it.