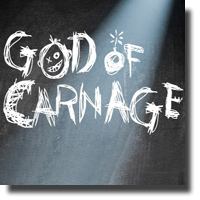 As parents, one thing we learn is not to get too involved in our children’s minor skirmishes with other people’s kids. The animosity generated between the adults lasts long after the kids have made up and having fun again. It’s a lesson completely lost on Annette and Alan Raleigh (Vicki Papavs and John Cassini) and Veronica and Michael Novack (Shauna Black and Oliver Becker), who set an extreme example of parents behaving badly.

It may be simply schadenfreude, but there is certainly something oddly cathartic in watching other people’s relationships disintegrate before your eyes. The two couples meet over coffee and clafouti (and later rum) in the Novacks’ home. The discussion over a playground scuffle initiated earlier in the day by the Raleigh’s son, starts amiably enough, but there are fissures in this fellowship steeped in artifice.

The initial civility begins to break down when the churlish Alan insists on taking a series of irksome mobile phone calls from a pharmaceutical client without apologising to his hosts. Alan’s one-way discussion provides a parallel subplot to the real-time situation that consumes only his partial interest in as much that it has to do with damage control and blame-shifting.

The more the characters’ dignities crumble, the more the actors shine in this ensemble slice-of-life theatre. John Cassini gives a typically droll performance as the hubristic Alan Raleigh, not all that dissimiliar to his critically acclaimed role of Yuri Kukoc on the television comedy series Robson Arms. Shauna Black as the volatile Veronica might conceivably have the most interesting character – outwardly noble, but inwardly vitriolic.

Oliver Becker as Michael is simultaneously sociable and sardonic. Vicki Papavs as Annette goes from mundane to over-the-top in ten minutes flat. She scores a special cheer from everybody that has ever annoyed by people conducting private phone calls in a private place when she dumps Alan’s mobile phone in the flower vase.

Gillian Gallow’s ostentatious staging of a tastefully furnished living room seems such an appropriate vessel for the kind of action that takes place. The set also inveigles the eye with a heteroclite sloping floor that offers an exaggerated perspective; perhaps it’s an intended subtext for the off-kilter quartet that pervades it.

Vancouver Civic Theatres and the Royal Manitoba Theatre Centre deserve a lot of credit for making sure that God of Carnage has been brought to Vancouver audiences as planned. It couldn’t have been coincidence that the music chosen to preface the opening scene was the Black Eyed Peas’ I’ve Gotta Feeling (that tonight is gonna be a good night).