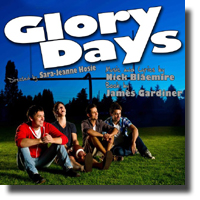 Glory Days is a seventy-minute musical revue by Nick Blaemire (music and lyrics) and James Gardiner (book) that has at its core a poignant coming-of-age story where the four young protagonists must suddenly accept the transition of high school kinship idealism to adult world realism.

A year after graduating from high school, four friends decide that it’s a good time for a reunion on their hometown football field. However, the mainspring that brought them together no longer exists. Will, Andy, Jack, and Skip were proud to look upon themselves as outsiders at school. None of them ever made the football team, and with the exception of Andy, they didn’t want to.

Will, (Adam Charles) the de facto leader among the foursome, but only by virtue that he is more invested in keeping the group together, has planned on celebrating the get-together by cooking up a prank that will cause the football jocks to get their comeuppance. When he relates details of the caper to the other three (Are You Ready?), he only gets support from the puerile Andy (Colin Sheen) who always appears willing to participate in juvenile shenanigans.

Jack (Darren Burkett), who seems to be the sensitive and serious one of the bunch and Skip (Brandyn Eddy), who exudes confidence and common sense would much prefer to hang out with a 12-pack of beers, a guitar and gab about high school moments gone by (The Good Old Glory Type Days).

While not possessing especially mellifluous voices, all four perform well on the rolling harmonies in the show’s ensemble numbers. Nico Rhodes and his highly visible on-stage quartet manage to iron out some of the imperfections in the vocals.

In the acting division, Colin Sheen seems to have the toughest role as Andy. He comes across as the jerk in this little group dynamic (as expressed in the song The Thing About Andy), particularly in being unable to accept one of the friends coming out of the closet and his retaliation to being the target of the other’s jokes in his passionate solo My Turn. Darren Burkett has the weakest character and fittingly turns in the most nondescript performance.

Despite shortcomings in the show’s storyline, new director Sara-Jeanne Hosie maintains an even, lively pace. A special kudo goes to whoever designed the programme to give it the look and feel of a school year book.

This show should appeal to anyone who can still remember their high school days, even if, like mine they weren’t that glorious.