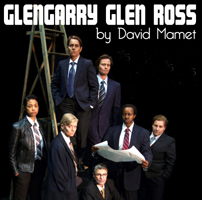 This Classic Chic Production of Glengarry Glen Ross is a curious adaptation of David Mamet's 1983 boiler-room drama about unscrupulous real estate brokers. At first glance it might seem that Mamet’s 1980s play appears to focus principally on the questionable dealings of a Chicago real estate office, but in fact, it brings into the much broader issue of cutthroat capitalism gone awry. Seeing this play today, it is easy to conclude that the toxic greed of the eighties was the pathogen for which we’re all now getting payback through the dual curses of corporate avarice and institutional corruption.

The title refers to a shady Florida real estate development known as Glengarry Highlands and Glen Ross Farms. The story relates to the shilling of land parcels by four pathetically macho and streetwise salesmen and their marginally competent office manager whose sales techniques border on criminal.

This adaptation using an all female cast and crew inevitably loses some of testosterone driven survival instincts, and while this taut drama still retains a good deal of its pique, it doesn’t quite catch fire in the way some earlier versions have.

The forty-minute first act deals entirely with three separate conversations in (presumably) the same low-grade Chinese restaurant. The first of these is between veteran salesman Shelley Levene (Colleen Winton) and indifferent office manager John Williamson (Marci T. House). Levene, who has evidently lost his touch, shifts seamlessly between abusive and desperate, finally resorting to bribery to persuade Williamson to cough up some prime leads.

On another table, sometime later Dave Moss (Corina Akeson) and George Aaronow (Suzanne Ristic) are bending each other’s ear about their employer over a few beers. The conversation takes a cynical twist when Moss proposes breaking into the office to steal leads then offering them to a competitor. Aaronow refuses to get involved, but Moss badgers him by pointing out that he’s already an accomplice by just “talking about it.”

Richard Roma (Michelle Martin) is the consummate opportunist and a seductive pitchman. When he sees the nebulous James Lingk (Christina Wells Campbell) drinking alone at the bar, he immediately identifies him as a potential mark, to whom he launches his well-rehearsed spiel through a “business opportunity“ smoke-screen.

The second act moves the action into the business premises of Mitch & Murray the morning after a break in. The ransacked real estate office looks like it wouldn’t show much better on a normal day. Each character displays a totally different reaction to the situation depending on their disposition; ranging from Aaronow’s nervous agitation to Roma’s nonchalance.

The actors seemed to enjoy playing off each other’s strengths, handling Mamet's machismo dialogue with moxie. Marci T. House arguably had the least interesting role with the acrimonious Williamson, as well as having to handle the worst lines.

Sarah Mabberley sets accurately establish a mid-eighties ‘look ‘n feel.’ Sherry Randall’s clothing is pragmatic and functional, although, some of the suits fit some actors a little too perfect.

It might be a permission issue, but I would like to have seen the female cast play equivalent female characters. The ensemble cast give a uniformly committed performance, but having women in the roles of men doesn’t make it better – just different.