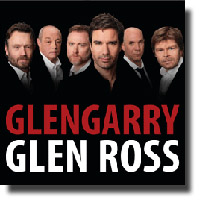 An Interview with Gerard Plunkett, actor and a member of the cast of the Arts Club Theatre presentation of Glengarry Glen Ross

Of all the productions recently presented by the Arts Club Theatre, few have gotten the same buzz as Glengarry, Glen Ross. Ticket sales have been robust and with an extension to the run unlikely, some theatre-goers could be disappointed.

Gerard Plunkett, who takes on the role of Shelley Levene, has been seen on many locally produced television shows as well as some memorable and not so memorable movies (Snakes on a Plane, anyone). When I talked with him by telephone during a rehearsal break, it was very evident that his first love is for the stage.

He was born and raised in Dublin, Ireland and like many Dubliners is a natural story-teller. He goes so far as to credit his typical Irish upbringing to giving him an advantage in his chosen profession. Certainly, he has managed to keep busy in a field where so many other actors find it difficult to maintain employment.

He told me that the ‘Glengarry’ project was initially conceived three years ago at an informal gathering of the same group of actors that will stepping be on to stage at the Stanley theatre later this week. Gerard has enjoyed rehearsals for Glengarry which has been an essential part of the creative process in staging David Mamet’s boiler-room drama. He is also delighted to be re-united and working with fellow actors he considers friends.

I asked him if he had seen the 1992 film adaptation which featured Jack Lemmon in the ‘Shelley’ role and how it compared to the Arts Club mounting. “The play is much more hard-hitting and in-your-face than the movie, which was made for a broader audience” he replied quickly and added, “The Shelley Levene character was emotionalized for the film, whereas the play draws a deeper contradiction of the brotherhood and the fierce rivalry of the salesmen.” While he acknowledges that the film is excellent work, he dismisses the notion that it offers any inspiration to him. “In theatre, things often evolve in the moment. One might go at see the same mounting of a play three times and see three different versions even though the lines and sets are the same.”

Gerard has a proclivity for portraying ‘outsiders’ similar to the luckless loser he plays in Glengarry. He mentioned that he would relish playing Shylock in The Merchant of Venice. Although, he does have fond memories of playing an ‘insider’ in his last Arts Club production, when he received a Jessie Richardson nomination for his work as Henry Higgins in My Fair Lady back in the Christmas holiday season of 2001.