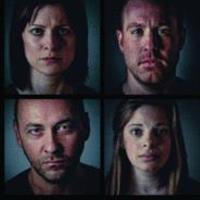 Flipping through Us Rats Theatre’s one-page program did not give me any good idea of what was about to transpire on stage. Usually I enjoy skimming the director’s notes or the playwright’s thoughts before the show begins, but for this world premiere performance I’ll admit it was a treat to go in relatively blind.

The very versatile Little Mountain Gallery accommodates this production very well - a small intimate space transformed into a very rustic vintage cabin-feel. The action unfolds slowly; we see two Canadian girls in a living room, one laying on the couch and the other reading a magazine. They chat for a little while, but details emerge very slowly regarding who they are and why they are there, after which the story gains momentum steadily until the action veritably explodes in the second half.

Tara Pratt gives a natural portrayal of Evelyn, and Katie Takefman plays her naïve and energetic younger female companion, Luanne. Initially, Luanne seems an unrealistically bubbly counterpart to Evelyn’s more subdued irritability, but as the play unfolds there are details that may help explain each of the girls’ complex personalities.

Colby Wilson in the role of Mack was slow to gain momentum as the recovering alcoholic ex-husband of Evelyn, and action between the two is awkward (which works, considering the situation), but Wilson completely transforms in the part and becomes a likeable, relatable character, delivering some of my favourite lines of the play. And until Jason Diablo appears on set as gangster Jerry, Wilson was my pick for MVP of this production.

Jason Diablo has the least stage time of anyone but decidedly steals the entire performance with confidence and intense ardor as Jerry. His character attempts to right the abstract wrongs perpetrated throughout this play. And with veins and tendons protruding from his neck, he delivers a wholly captivating speech on betrayal, justice, and balancing the two. “You cannot win, you must lose... While I am here there will be balance,” he exclaims to a terrified Evelyn and Mack. He continues, “The world is rotting.” Despite being in the least morally acceptable position of them all, his words ring true to the audience who can see that this one man potentially sees the world more clearly than anyone.

Ultimately, playwright Wade Kinley is successful in presenting a thoughtful piece of theatre that resolves itself very surprisingly (no spoilers here), and the players tie together the themes fairly well in this production. The price tag to see this performance is a steal at $12/$15, but has a short run - showing until March 16. All in all, this is a highly recommended to those who enjoy the gritty and the raw… but not for the faint of heart, or the refined of taste.