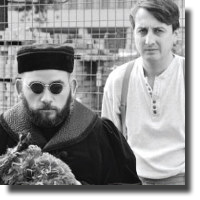 It’s been quite some time since I’ve gone to a live comedy event, and I must admit, I had my reservations as to whether the humor I was about to experience would actually be ‘funny’ to me. Let’s face it, some comedy can be out-and-out raw and/or tasteless, and I was hoping that would not be the case at the Cultch for the Giants VI: The Finale. Not having attended the previous five Giants events, I was not familiar with the format, the comedians and the type of humor. But that was not the case for the majority of those who attended on Saturday night. There was clearly a following who was familiar with this group of funny performers as bursts of laughter were often heard from the boisterous audience throughout the evening.

The first half of the show was made up of the best of the best of the previous shows – with entertaining routines that included an improve duo ‘Sister Act’ and ‘The Progressive Polygamists’. However, the two stand-up comics, Graham Clark and Ivan Decker were quite hilarious, and both were obvious audience favorites. Clark, a well-known, award-winning Canadian comic, was enthusiastically received by his fans, and his routine did not disappoint. He has a very natural and somewhat unkempt presence with a measure of self-deprecation thrown in, often questioning himself. One of his best routines of the evening centred around lonely sailors and seals – use your imagination – and another very funny bit was on the making of vegetarian jerky.

Decker , a regular on CTV’s ‘Comedy Now’, was also a crowd favorite. A young, good-looking local boy, he tells fast-paced stories with a cleverness that appeals. My favorite was his take on skiing and alcohol – very funny. Any concern about whether the comedy would be too ‘low-brow’ was completely dashed, as all acts were funny without resorting to the lowest common denominator.

The format of the second half of the evening’s event was not as the first, but rather the presentation of Charles Demers work-in-progress comedic play read by four members of the Main Street Theatre. Demers, a regular on CBC Radio One’s ‘The Debaters’, was not able to attend last night, as he was apparently at the Leo Awards. The performance of his play was just a taste of what will eventually be a polished full-blown comedy and with the actors literally standing and reading the script, it was difficult to get a good sense of it. I’ll wait for the finished product.

A good night – and a relief to know that comedy is alive and well without offending!!