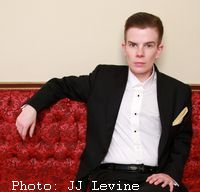 Writer and storyteller Ivan Coyote and musician and author Rae Spoon are both transgendered artists who mix storytelling, original music, video, and animation in their new production which showed us how it feels when you don’t conform to gender stereotypes in a world that sees only male and female roles.

What I didn't like about this show is the lack of eye contact with the audience. They were reading off their script and I didn't find that very effective.

A kind of show like this caters to a certain type of audience: the lesbians. So if you're not a lesbian, it's hard to identify with these transgendered artists. Opening night was a full house, and it appeared like the audience was mostly lesbian.

One last point: why call it a failure? In fact, in this day and age, especially the 21st century, there is no shame being transgendered. It's become a common phenomenon--being gay is no longer taboo. In fact, it seems like the gays are taking over the world and controlling what used to be the male/female culture.