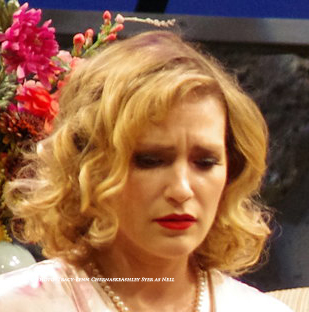 The Gazebo has been around for a long time - a Broadway play in 1958, a movie in 1959, a musical comedy in 1960, and countless productions ever since. This Metro Theatre presentation is unique, mixing comedy and suspense in a fully satisfying and darkly exhilarating presentation.

The production team deserves real credit for providing an attractive set that fits, realistic in its 1950s upwardly mobile setting, costumes befitting the characters status, and props that suit and work for the action. Lighting and sound play important roles in this play. Timing is key, and works effectively to sustain the smooth development of the action.

Rogers direction pays off handsomely as romance mixes with intrigue, building suspense in the cover-up of a death - a death motivated by love. The action moves seamlessly thanks to the talents of everyone on stage. Kimball Finigan brilliantly portrays a gregarious Elliott Nash, a successful writer, totally in love with his wife, Nell, who loves him equally deeply. His active imagination takes over when a crook threatens that love. The result is trouble. It doesnt help that their neighbour and best friend is a prosecutor.

Bill McNaughtons smooth portrayal of the prosecutor, Harlow Edison, works to innocently stir the pot in his investigation of a death that is central to the action. Ashley Syer is stellar as Nashs glamorous wife, Nell, moving gradually from contentment to confusion to concern as the plot unfolds. The rest of the cast are great, too, in maintaining the mounting tension and lightening it with humour. Many of the personalities verge on caricatures and this is magic in this production. Congratulations must go to every one of the actors for their skill in walking the fine line between credibility and farce. The result is a captivating bumble through laughter, confusion and suspense the makings of an evening of entertainment well spent. See it.